Have you noticed an uptick in the number of Tweets that mention Spotify, Turntable.fm or other music services lately? It’s all part of their diabolical plans. Online music services live or die by word of mouth, which is why most of them have hooks into Twitter and Facebook for users to share invites and the songs they are listening to. But which ones are winning the battle of the music tweets?

Social media analytics company Simply Measured looked at a one week sample of tweets linking to one of three music services: Spotify, Turntable.fm, and Pandora. It found that 51 percent of the Tweets linked to Spotify, 26 percent to Turntable, and 23 percent to Pandora. So at first blush, Spotify seems to dominate. But if you strip out invite tweets, it’s a different picture altogether. Since Spotify launched in the U.S. a couple weeks ago, people have been flooding Twitter with invite links. Take those out, and it’s share of remaining tweets is only 2 percent. Turntable comes out on top with 52 percent of the tweets, followed by Pandora with 46 percent.

What this data suggests is that Turntable.fm is still a very strong early adopter addiction. And it too is still in a limited beta. Yet its users tweet out more than Pandora’s. turntable user share the songs that they DJ, with 40 percent of its tweets falling into that category.

Finally, Turntable users have an average Klout score of 34, compared to 32 for Pandora users and 29 for Spotify, suggesting that its users are more influential on Twitter, at least according to Klout. 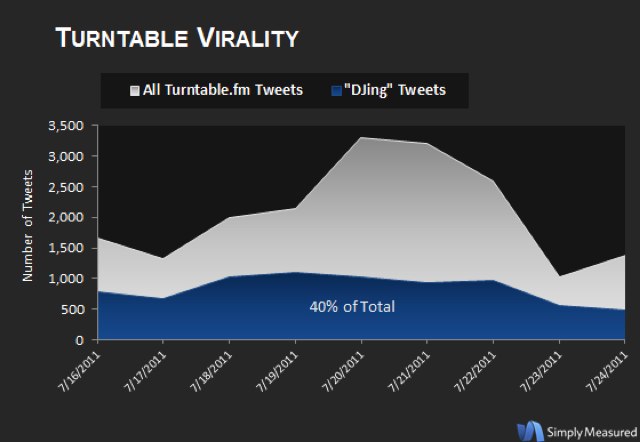