Lookout, a company that offers security services for a number of smartphones, is unveiling a new mobile API today, which automates mobile threat detection and analysis.

For background, For background, Lookout’s web-based, cloud-connected applications for Android, Windows Mobile and BlackBerry phones help users from losing their phones and identifies and block threats on a consumer’s phone and mobile browser. Users simply download the software to a device, and it will act as a tracking application and a virus protector much like security software downloaded to a computer.

The Mobile Threat Network is powered by a dataset of over 700,000 mobile applications that grows daily as more applications are added to app stores around the world. On average more than 1000 apps are added to the Mobile Threat Network daily. Lookout’s Mobile Security API can extend this protection available to any app store or download site. With open app markets, the risk of apps being tied to malware and spyware is increased. It’s difficult for users to determine prior to downloading if an app includes a security threat.

Lookout, who was featured in a Verizon Wireless commercial last year, says Verizon will be the first company to use the Mobile Security API to provide customers with V CAST Apps with real-time protection against threats to the applications they download from Verizon’s mobile storefront. The API works on the backend of the App Store, to determine if any apps contain malware or other security threats.

Considering the proliferation of independent mobile app stores, Lookout’s API makes sense as an extra security layer on top of these app stores.

And as more consumers use smartphones, the need for malware and browsing protection increases for these devices. Over the second quarter of 2011 Lookout saw an 85% increase in the number of mobile malware detections across its user base. Because of this trend, Lookout’s offerings have been growing fast. In December, the company had 4 million users and has now more than doubled that number, with ten million users. In fact, Lookout is adding 1 million users per month. And the company just raised $19.5 million in funding from Index Ventures, Accel Partners and Khosla Ventures. 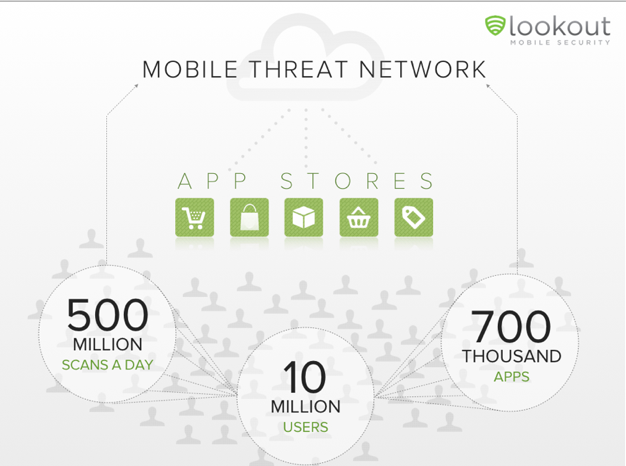