Rdio has a head start in this race but it might not matter. Rdio left private beta last August and has since gained a good deal of traction here in the States. It’s our hometown hero, if you will. Even though it wasn’t available until today, Spotify’s hype built the service up to near legandary status. The two services are remarkably similar on the outside, but when you dive in, there are some distinct and fun differences.

Both companies take a different approach to their desktop application. Spotify’s desktop app is designed to be a catch-all, a one stop solution for all your media needs. It allows users to steam music and playback local media. It can sync songs with connected media players (including iPods) and cache streaming songs for offline playback. It’s truly meant to be the only media player you need on your computer.

That’s not the case with Rdio, whose desktop app is really just a portal to its web service. Nearly everything is the same, including the navigation paths and user interface. Rdio’s app lacks any local media playback functions, which may be just fine for some users. The desktop app does play friendly with keyboard media functions (like the pause/play key you may have) where Rdio’s web service does not.

The different approaches result in a slightly different feel. Both services are designed around music discovery, but Rdio’s desktop application, since it’s really just a skinned web app, outclasses Spotify in this area. Nearly everything is a hyperlink to more content. The album cover, the song, the artist, every user element has a link that takes you to music. Spotify goes about it in a traditional desktop way by have simple navigation paths, but they’re not as easily identifiable.

Still, Spotify’s desktop app is far more versatile than Rdio’s. It seamlessly mixes online and offline content with social sharing tools. The music discovery paths could use some work but the other functions combine to beat Rdio’s.

Spotify doesn’t have a web app. This is a key difference between the two services. Rdio will work in nearly any browser on any computer and maintain user settings. At work? Just log in and all your music, friends and listening history is there. This isn’t available on Spotify.

In fact, Rdio was originally just a web service. The OS X desktop app came a few months after the service launched, and the Windows flavor just dropped a few weeks back. The whole service is designed to operate from within a browser and does so wonderfully.

I’ve found that Rdio’s web app allows it to work on web-connected devices such as the Boxee Box or Google TV. Rdio doesn’t have a dedicated app on either of these Internet appliances but the device’s web browser allows you to use the service anyway. You can’t do that with Spotify although the service is available on several hardware platforms (more on this farther down.) 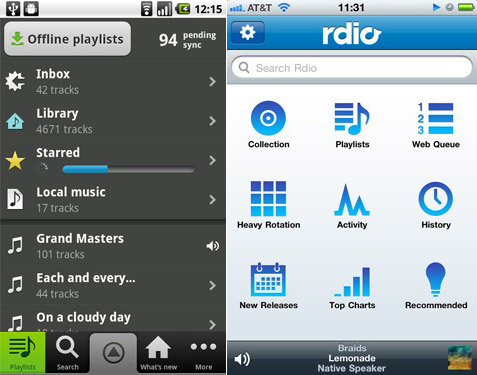 Neither of these services would be as popular if they didn’t support mobile listening. Both Rdio and Spotify have functional mobile apps that ports most of the service’s functions to your smartphone. Once again, on the surface, the two sound very similar and feature the same functions including offline modes.

The two apps are very similar and there really isn’t a standout. It’s more a personal preference. Rdio’s UI is a bit more simple, but still maintains a lot of the elements found in the web app. Spotify’s on the other hand is sort of busy, but nicely integrates the socal media sharing functions. Both play music and that’s the most important function anyway.

A big off topic, but one standout in this area is MOG’s app. Not only does it flow better than Spotify’s or Rdio’s, MOG’s smartphone app is simply beautiful. It feels like a smartphone media app rather than a web app crammed into a smartphone.

Everything has to be social now and so both media services are built tightly around this thought. Both make it easy enough to share playlists, albums and songs through Facebook and Twitter. However, Spotify takes it one step farther and gives users the ability to quickly share songs and albums through a sort of internal mail system. Glee bombing is quickly becoming a favorite pastime of mine.

However, while I’m of the opinion that none of this sharing nonsense is necessary, Spotify does, once again, outperform Rdio mainly as it allows subscribers to share songs with anyone; all that’s required to listen is a free Spotify account. Rdio allows for embedding of songs, but you have to a paying subscriber pay to listen. Update: That’s not entirely true. Just like Spotify, Rdio allows non-subs to sign up for a free but limited account without a credit card.

It has never been easier to discover new music and trends. Rdio and Spotify, along with several other streaming sites like MOG, Grooveshark, and Rhapsody, built their service around this core idea. With the exception of Grooveshark, these services tend to take the album approach by presenting users with a grid of album covers. Spotify uses the What’s New section as its homescreen where Rdio’s Heavy Rotation section (the service’s most popular music) is the first page displayed.

This is where Rdio tops Spotify. Nearly everything on Rdio, either on the web app or desktop app, guides you to music. The designers placed a hyperlink where ever someone might want to click. Best of all, following the rabbit down the hole of music discovery doesn’t interrupt the music playback — even on the website. A sidebar is off to the right on nearly every page with relative songs, artists, and info. Want to hear music of the same sort? Each page has a Play Radio Station button that cues up similar songs and artists.

Both services have similar sections in new releases, most popular, and top charts. Rdio also features a recommendations section that displays new artists based on your listening habits. This section alone allows Rdio to topple Spotify in the music discovery category.

In the end, though, I doubt these differences will really matter. Rdio is an amazing tool to discover new music and Spotify is the media player from the future. There’s more than enough space in this huge market for several major players. Spotify might quickly outpace Rdio simply because of advertising and its slightly more recognizable brand. But the real winner are us consumers. As Louis C.K. wisely put, “The shittiest cell phone in the world is a miracle.” This also applies to streaming music services.