The plan is to open an additional 75 retail brick & mortar locations over the next two to three years. That’s a massive uptick from the 11 Microsoft Stores opened over the last two years. Get ready. The Microsoft vs Apple battle is about to come to a mall near you. The smart money is on Apple, though. 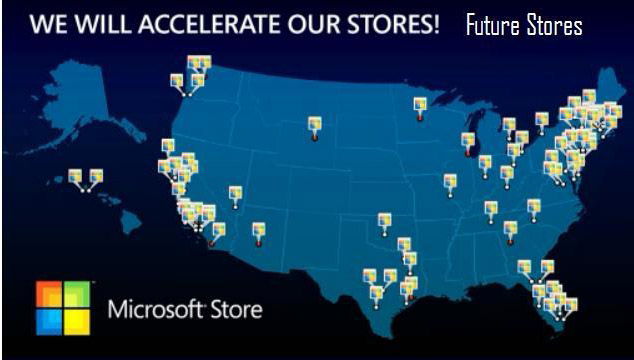 It seems the majority of the stores are hitting the North East region of the US where there currently isn’t a Microsoft Store. Two are going to Hawaii, Florida is getting a bunch as is Texas and California. The map shows several scattered over the midsection.

Just like the current Microsoft stores, these outlets will feature more than just PCs. They’ll stock and display Xbox 360s, Window Phones, software and media players not named iPod. They might even break out in a little song and dance from time to time. 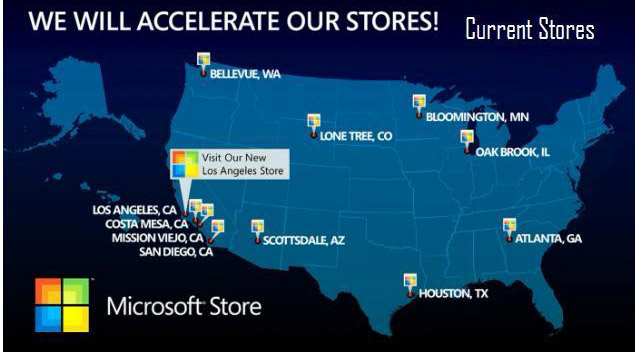 This plan was made known today when Microsoft’s COO, Kevin Turner, flashed the above slides during his presentation at the Microsoft Worldwide Partner Conference. Neowin managed to get the slides that maps the planned locations.

This news couldn’t be any more timely. Just today a USA Today report hit that stated Apple was the fastest growing retailer in the US. Apple’s sales rose by $4.6 billion during the first three months of the year for a whooping 80% increase over last year’s numbers. Their retail numbers are so large that USA Today quotes retail sales expert David Berman on stating Apple Stores alone accounted for one-fifth by publicly traded retailers in the U.S. iPhone sales alone rose 113% over last year.

Microsoft is going to lag behind the sheer number of Apple Store locations for sometime if not forever. That likely doesn’t matter as Microsoft is probably looking at conquering certain regions rather than the whole world. But don’t think for a minute that world domination is out of the question. This is Microsoft.