One of the key ingredients when it comes to building a solid software product is ensuring that your team of developers, project managers, and other key personnel are all on the same page. That need has given rise to a variety of services and applications designed to make this a bit easier. And today sees a new, slick-looking entry to this market called Interstate, brought to us by Y Combinator-funded company Baked Code.

The goal of Interstate, say founders Greg Cooper and Simon Fletcher, is to offer developers a tracking tool that hits the sweet spot between 37signals’s Basecamp — which they say is fairly basic — and PivotalTracker, which has loads of nuts and bolts.

The application includes the functionality you’d expect from a development roadmap app: you can the current status of each task (and subtask), plot out where things should be over the coming weeks, and attach supplementary files to each task. Oh, and it’s very nice looking (and you can tweak the theme if you’d like).

Once you first log in, you’ll be asked to get started on your roadmap. Tasks can be created as ‘Roads’, which in turn can be bundled together to create overarching ‘Routes’. The project admin can invite coworkers, and can also set which roadmaps they’re able to edit and view.

There’s also a feature that the founders believe is unique to Interstate: the app allows developers to publicly display a portion (or all, if you’re feeling especially transparent) of their roadmap. This can help keep users informed on your current progress, without having to deal with a constant stream of inbound inquiries (this was one of the motivations for initially building the app — Cooper and Fletcher say they were tired of getting asked about their progress).

At this point Interstate is being released as a free public beta, but eventually the service will start charging (the founders say they’re still figuring out the ideal price point and model). The company already has some well-known clients, including DailyBooth, Seesmic, Media Temple, Virginia Tech, and Michigan Tech.

In addition to the aforementioned Basecamp and PivotalTracker, Interstate will be competing with Asana (which is still in private beta). If you’re looking for a management tool that isn’t necessarily targeted toward developers, also see MetaLab’s Flow.

Note that this is the first of Baked Code’s products, and it sounds like more may eventually be in the works. 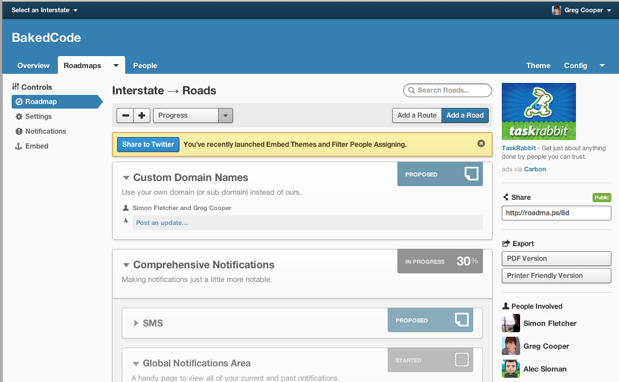