Netflix is officially on an all-out assault on the DVD — or so says their just-released pricing strategy. The new prices yell loud and clear that streaming is the future and you’re going to pay (literally) if you don’t hop on the bandwagon. Maybe this is why Reed Hastings stated back in May that DVD shipments might go down for the first time ever.

Gone are the plans that include streaming and DVD. Customers previously had the option of selecting the streaming plan for $7.99 and then paying an additional $2 to be able to rent one DVD at a time. Now the plans are separate with the streaming plan costing $7.99 and the DVD plan at $7.99; selecting both options for $16 results in a 60% price increase. Current subscribers will be able to ride the lower price until September 1st, but the plan just went live for new customers. Ouch.

On the Netflix blog, the price increase was attributed to position DVD rental as a proper business rather than just a $2 add-on to the streaming service. Netflix even created a “separate and distinct management team” to head up the DVD business and is now led by Andy Rendich, a 11 year veteran of Netflix and Chief Service and Operations Officer. It’s just too bad the pricing and Netflix sign-up process states something different. Renting a DVD is now just a $7.99 add-on business. 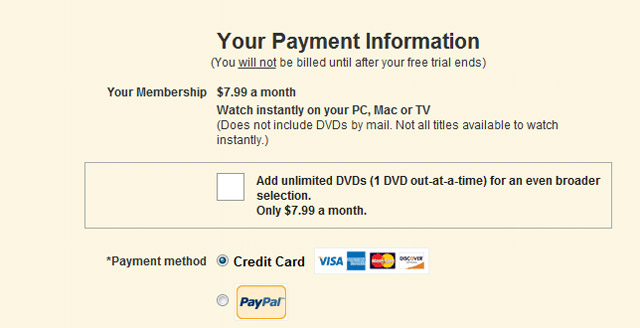 While Netflix might state DVD rental is separate, it’s not treating it as such. New customers are simply asked if they want to add the $7.99 a month service when signing up; the streaming service is selected by default.

Previously, I know at least in my house, the DVD option was a nice backup just in case the particular title wasn’t available for streaming; it really felt like a $2 add-on. This happened a few times over the last year since Netflix’s streaming catalog is around 20k titles where they have 100k available on DVD.

Erick caught up with Netflix’s chief back in May. “Streaming is the core of our business and it is growing rapidly.” he said “Streaming is much bigger than DVD for us in terms of hours of viewing, growth, and focus. We are seeing massive consumer adoption of streaming.” This departure from DVD rental seems to state that as well. Streaming is the future, not physical media.