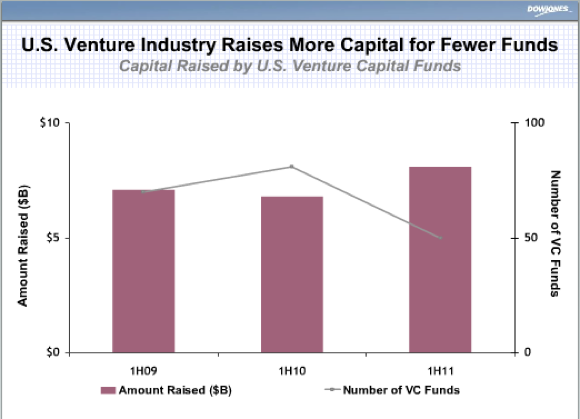 Dow Jones is reporting mixed numbers for venture fundraising this morning, releasing data that shows that capital raised for U.S. venture funds rose 20 percent over the same period a year ago, to $8.1 billion. But that stat comes with a caveat— the number of funds that held closings plummeted 38% to 50 funds. Seven firms were responsible for raising the bulk of the $8.1 billion, raising almost 80 percent of the total, or $6.3 billion. For basis of comparison, in the first half of 2010, 81 U.S. venture funds raised $6.8 billion. This trend was illustrated in this morning’s Thomson Reuters and the National Venture Capital Association report.

In the first half of 2011, a number of well-known VC firms closed significant funds. Bessemer closed a $1.6 billion fund, Sequoia closed a $1.3 billion fund, and Greylock added a $1 billion fund. In June, Accel closed two funds for a total of $1.35 billion in new capital. Andreessen Horowitz added a $200 million growth fund in April.

In terms of U.S. private equity, funds raised $64.7 billion in the first half, a 35% jump over the same period last year. European private equity funds collected $24 billion, a 48% increase over the year-ago period