Geo-based marketing is just getting started, and local businesses are feeling their way around how best to use service like Foursquare, Facebook Places, Gowalla, and even Twitter. It’s hard enough if you have only one store. For chains and national retailers, managing Foursquare Specials across 400 stores is a nightmare. MomentFeed is trying to bring some order and analytics to this chaos with a location-based marketing dashboard aimed at businesses with more than one location.

MomentFeed pulls in merchant location data from Foursquare, Facebook, Twitter, and Gowalla, and gives retailers a unified view of all the check-ins, deals, and specials across their locations nationwide. (It is also built on Factual’s location data, which helps to harmonize locations between services). With one dashboard, a retailer like 7-Eleven or a fast-food chain can see that maybe more people are checking in with Foursquare in New York, but with Facebook Places in the midwest and adjust their targeting accordingly. “We are built on the place signal, instead of the keyword as the primary signal,” says CEO Rob Reed.

The startup offers tiered services, from analytics to campaign management to CRM, which range in cost between $29 and $99 per year per location. It is still not clear what merchants will be charged to run specials on Foursquare and other services, but Reed expects to share revenue with each location service. “We are happy to share revenues with Foursquare and others for the data,” he says, “similar to Twitter with DataSift.” (DatSift also raised money today in a $6 million series A). 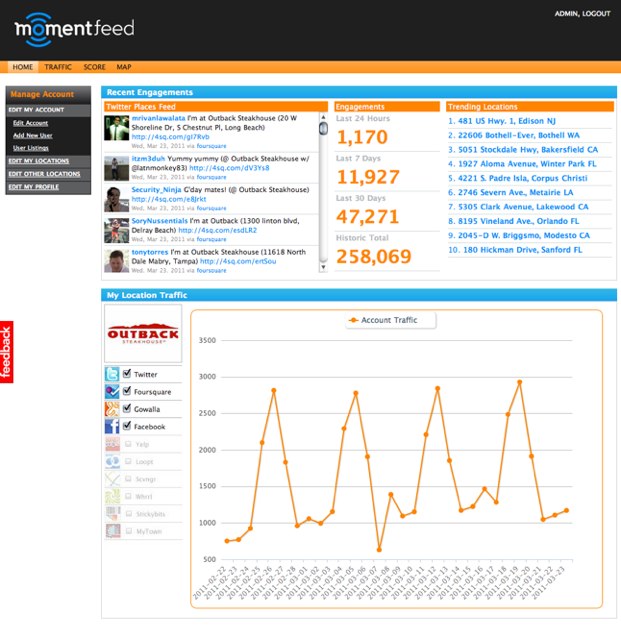