Perhaps there’s something to these friend circle/list/groups after all.

As you’ve doubtless heard by now, Google recently launched a social network that revolves around one core idea: people want to share different things with different groups of friends. Of course, it’s an idea that isn’t all that novel — Facebook has allowed users to do just that via its friends lists, which launched years ago. And it’s barely been touched by their userbase.

But is the problem that people don’t care for this selective sharing, or that they simply don’t want to put the effort into building out their friend lists?

A hot new startup called Katango thinks it’s the latter, and it has the answer: it’s going to sort your friends for you, hooking into your Facebook account via Facebook Connect and automatically generating Lists based on your interactions with your friends and a host of other data. You can download their app right here.

The company has some strong credentials behind it — founded a year ago, it’s since raised $2 million led by an investment from the Kleiner Perkins S Fund (Bing Gordon is on Katango’s board). Cofounder and Chairman Yoav Shoham is a professor of computer science at Stanford; the other two cofounders, Michael Munie and Thuc Vu, are Stanford PhD grads. And they recently brought on Yee Lee as VP of Product, who was an early employee at PayPal, Slide, and founder at TipMobile and Crave.

So what exactly is Katango launching?

Today the startup is introducing step one of its plan: an iPhone application, which just went live on the App Store. Fire up the iPhone app, connect it to your Facebook account, and it will generate a handful of Friend lists based on a variety of factors: how closely you’re connected on the social graph, your stated geographies, and, most important, how you’re interacting with each other on Facebook. I haven’t gotten to try this out for myself yet, but if it works as advertised, the lists Katango produces should be surprisingly accurate. VP Product Yee Lee says that there will likely be some errors, but the friends that don’t fit in a given group can be easily flicked away.

Once you’ve created your lists in Katango, you can selectively share content to the friends in those lists in a handful of ways. The app gathers contact information from both your phone’s address book and Facebook. And you go to send a message or photo to a group, the app will send it via email, Facebook message, or push notification, depending on which contact information you have for them, and if they have the Katango app installed themselves.

But the iPhone app launching today is really a proving ground for the technology. Eventually Katango plans to let other services and apps tap into its algorithms, allowing them to integrate its auto-grouping functionality (this wouldn’t be a purely benevolent move, either — Katango would also be able to improve its algorithms from that additional data). And the Katango will eventually be on other platforms, like Android, and a web-based version of the app.

Katango is tackling an immensely challenging problem, but if they get it right, the resulting engine would be invaluable. I asked Lee if the company has gotten any offers from Facebook and Google yet. He chuckled, but did say they’ve talked to a couple of “big names in social”. 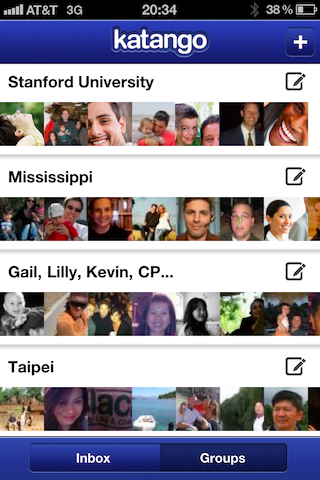 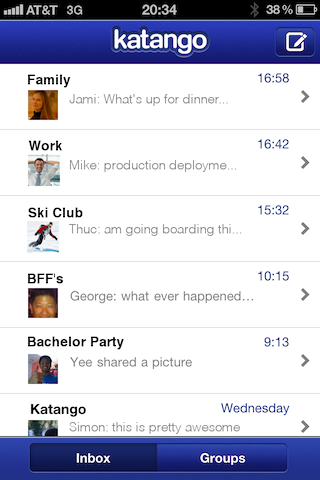