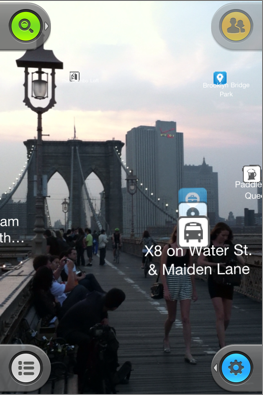 SHAPE Services, the company behind IM+ messaging applications, which allows users to connect to services as diverse as MSN, Yahoo!, Google Talk, AIM, Facebook, MySpace, Skype, and Twitter all from a single mobile app, is today launching a new app for iOS that brings aggregation to check ins.

According to TC’s own Robin Wauters, SHAPE’s IM+ apps currently have about 12.5 million registered users, and the startup hopes to leverage its broad mobile user base and instant messaging clients with a similar approach to check-ins — only with a heavy dash of augmented reality (AR).

CheckIn+ uses augmented reality technology to overlay a user’s current surroundings with places from select geolocation applications, allowing users to see each notable destination relative to its position in the real world, all as a live video image on their iPhone or iPad.

As a user moves about with his or her device, they can see which places (like a subway or bus stop) are nearby and what distance they are from various points of interest. In the case of the iPhone, simply by holding the phone vertically, the app transforms a traditional map view into augmented reality.

The main feature, though, is that the app gives users the ability to check-in on geolocation services like Foursquare and Facebook Places, allowing check-in to both services simultaneously with a single tap. With CheckIn+, users can discover cool local spots, and share highlights from bars, parks, venues, and more through a places search.

Users can also add new places on Foursquare, and gather loyalty points and badges just as you normally would with the check-in service, as well as share photos of favorite places, view friends’ activity streams, see where they are in realtime, and leave comments for them on their streams.

SHAPE Services CEO Igor Berezovsky told us that CheckIn+ will both be coming to Android phones and tablets and will be adding text and video chat features to the app in the near future.

The app is currently available in two versions, one free and one paid. According to Berezovsky, CheckIn Pro (the paid version) will include the same features, but will be ad-free.

For more of the visual experience of CheckIn+, check out the video below: