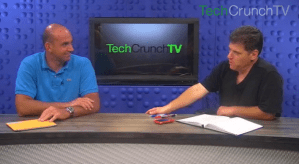 “If you don’t adapt, you die,” Loic Le Meur told me when he came into the TechCrunchTV studio last week. And Loic – aka monsieur Pivot – is certainly one of the Valley’s most skilled adaptors. Having founded Seesmic in 2008 as a video aggregation network, he then transformed it the next year into a popular consumer Twitter client before shifting it earlier this year into a Salesforce and Softbank backed enterprise CRM tool.

The pivot, of course, is the thing these days. And Le Meur – perhaps because of his skill as a wind surfer – is a master of sniffing changes in the business environment before anyone else. In contrast with Catarina Fake and Philip Kaplan, Le Meur is strongly opposed to what the calls “the disposable start-up.” For him, he has a moral obligation to his investors at Seesmic (which include Mike Arrington) to adapt the company to the new environment – even if that sometimes means transforming the company into something unrecognizable from its previous incarnation.

So is monsieur Pivot right – is the “disposable company” immoral?

This is the second part of a two part interview with Le Meur. Yesterday, he explained why European start-up entrepreneurs have nothing to learn from their European counterparts. That post sparked a sharp rebuke from TechCrunch Europe’s Mike Butcher. And Loic responded himself in the original post comments.

Why entrepreneurs who don’t adapt, die

On the immorality of the “disposable startup”