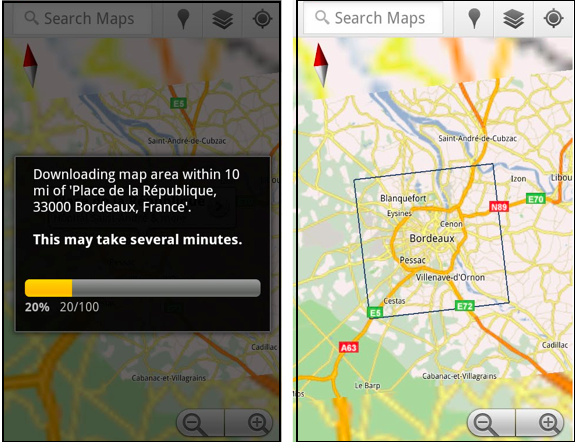 No matter which side of the smartphone wars you’ve landed on, it’s hard to deny that Android’s Maps application blows iOS’s out of the water. And this week it’s getting even better.

Yesterday Google highlighted a new feature that’s super handy for anyone who uses above-ground public transportation on a regular basis: turn-by-turn navigation for transit, which helps make sure you never get off at the wrong bus stop. And they’ve just pointed out another great addition that I’ve been yearning for for ages. Say hello to offline maps, thanks to a new feature in labs called Download Map Area.

To activate the feature, you’ll first have to visit the Labs section of the Maps application, which you can access using the Menu button. Enable the Download Map Area option, and from then on when you browse to a Place page and hit the ‘More’ button, you’ll see an option to locally store a map of the surrounding area.

And it’s a big surrounding area — Google will download local copies of the map tiles within a 10 mile radius of that venue. Which means that you can easily download the entirety of SF or Manhattan in a single tap (the download itself took about a minute for me over a Wifi connection). Then, next time you fire up a map but don’t have a data connection, you’ll still be able to pan and zoom around the city all you’d like.

The feature is made possible by the fact that Google Maps on Android uses a vector-based system for displaying map tiles, rather than the older image-based system (which is what the iOS version of Maps still uses). The vector-based tiles use much less data (around 1/100th), which means they are quicker to download and can be stored locally without using too much storage space. Google Maps for Android has actually been caching mapping data automatically for some time now — the difference this ‘download maps’ feature  brings is that it lets users explicitly choose which areas to store locally.

It’s a great start, but it’s still clearly a work in progress. You can’t look up transit maps while you’re offline, and you can’t run search queries for venues and addresses that appear in the map areas you’ve downloaded. But these are pretty obvious features, so hopefully they’re in the pipe.