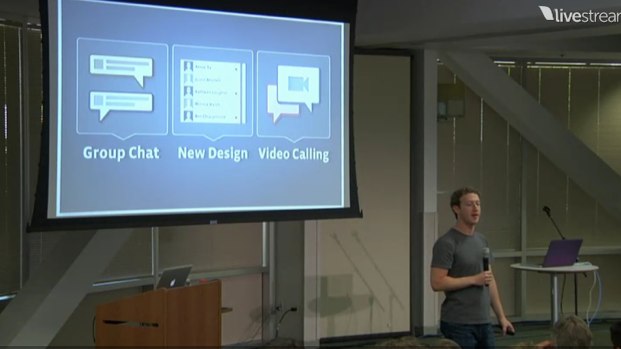 The new design makes chat look better on wide screens. Now there is a side panel showing you the people you chat with the most and whether they are online or not, which shows up on wider screens. It reminds me of the side rail in the RockMelt social browser, which Facebook has been working with closely.

But the big announcement is around video calling, which we broke last week. You can try the video calling now. It browser-based inside Facebook, and is currently only one-to-one video calling. (Skype charges for group video chat). One nice feature is that you can leave your friends video voicemails if they don’t answer, so it is both live and asynchronous. Jason has more details.

Immediately, people will be comparing Facebook video calling to Google+ Hangouts, which is a group video chat capability within Google’s new social product. The lack of group video chat in the Facebook product might be seen as a weakness, but most video chats tend to be one-to-one. And Facebook can always add group video chats later. The better comparison is to Google Chat, which has supported video in GMail since 2008.

CEO Mark Zuckerberg calls the Skype app “the first example of a great social app.” It’s not just video chat, it’s video chat with your Facebook friends. He sees the next five years being about social apps built on top of the infrastructure Facebook has built. Communications products are inherently social, and chat is a good place to start.