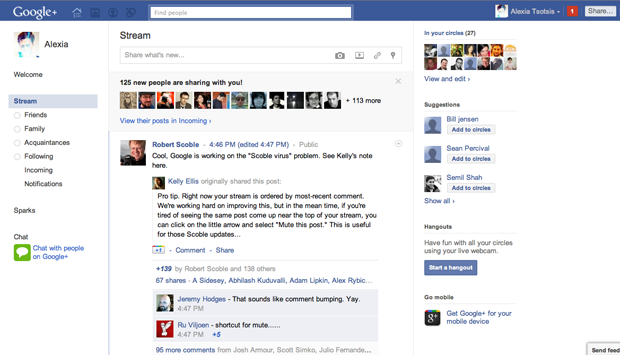 The social networking wars have dialed it up to 11 this week, with Google unleashing its highly anticipated (and highly leaked) Google+ social initiative upon the world on Tuesday — to not a bad response, to be honest. So it’s not that surprising that today Facebook countered the + hubbub with its own “we’ve got something awesome” unveiling planned for next week. You crazy kids!

The resemblance between the two social networks is uncanny — my Tweet-length opinion is that Google+ is like Facebook with a more usable, streamlined Photos and Groups interface (and that might be enough to win). Only time will tell.

In the meantime, for those of you who have the decidedly middle class problem of social network fatigue, there is a solution. Thanks to the unlimited creativity of  humans, you can now actually make your Google+ look like Facebook, with the Google+ : Facebook Stylish extension or this CSS code.