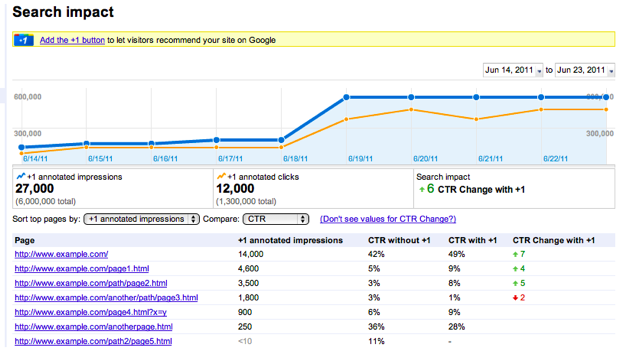 Back in March, Google officially started rolling out the +1 Button in its search results, allowing users to vote up the pages they found most useful. Two months later, on June 1, it launched a widget that lets website owners integrate the button into their pages, just like they do with Facebook’s ‘Like’ and Twitter’s ‘Tweet’ buttons.

Today, that changes: Google has just announced that +1 data will be displayed in Google’s Webmaster tools, allowing site owners to see exactly how much of an effect +1 is having. You’ll now be able to see how many +1 a page has in total, and what impact that has on Clickthrough Rates.

And Google has another trick up its sleeves too — it’s going to also give you analytics on any other social widget you have installed, like Facebook’s Like Button. Update: This feature requires site admins to add an additional piece of code, see the Google post for instructions.

Here’s how Google breaks down the new features for social widgets:

The value of +1 for users as opposed to site owners will likely come not just from improved search results, but also from integration in Google+, the social network that it launched yesterday. That’s assuming, of course, that people keep using it once it launches to everyone (I’m liking it so far).