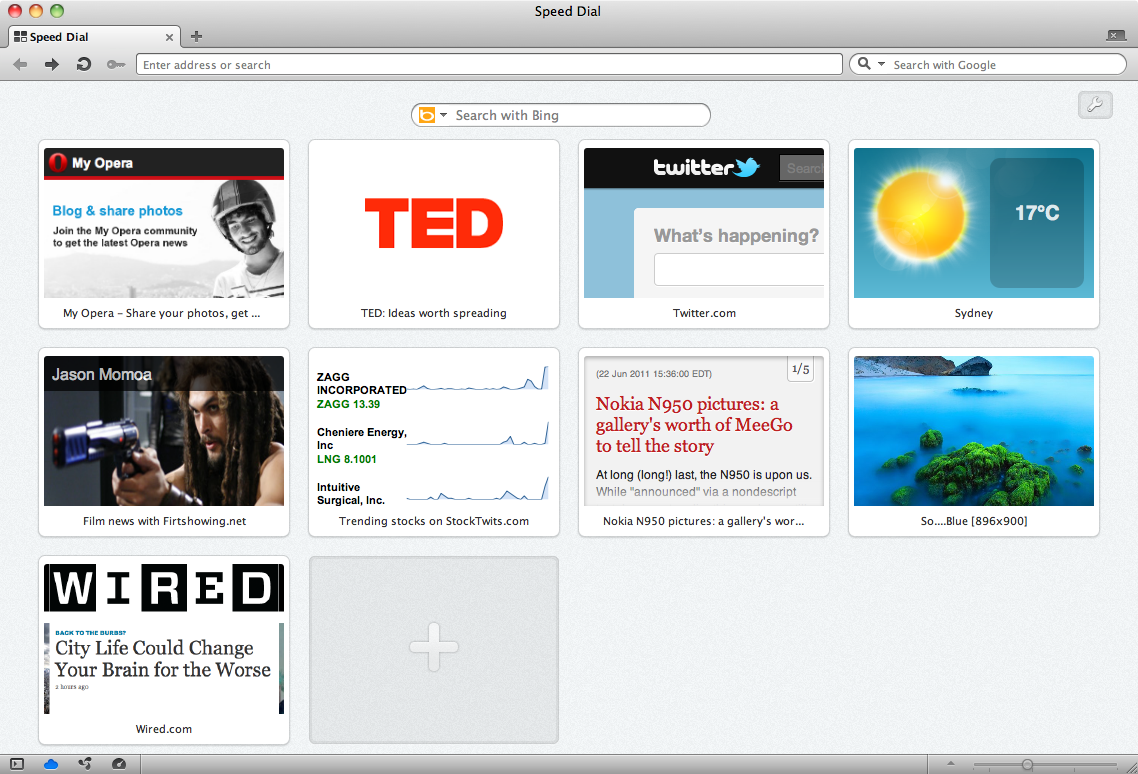 When you’re in fifth place in the browser races, there’s room to be a little goofy. That’s why it can be a pleasure to read the releases coming from Opera Software, the quirky Oslo-based company responsible for the eponymous Opera browser — the underdog currently enjoying a 2.4 percent share of the browser market behind IE, Firefox, Chrome, and Safari.

Which is clearly why Opera is proud to announce that eye-catching (even if slightly irrelevant) statistics like the 1.2 million “stormtroopers, droids, and janitors” that can fit into an operational Death Star or the 11 million followers Lady Gaga has on Twitter, now have to take a backseat to Opera’s own numbers, as the browser officially acknowledged that it has accumulated over 200 million users across its platforms — a number that will now be tracked on Opera’s homepage. (Along with other humorous stats.)

Not only that, but Opera is announcing today that it is releasing a new version of its browser, 11.50 to be exact. It’s been six months since Opera 11 hit the streets, and, as the Norwegian company says in its latest press release, “Our mothers are so proud of us. We worked long and hard to bring you the best Opera browser yet. We even took pictures to prove it“. But what is it, exactly, that makes Opera mothers so proud?

In part, this pride is due to Opera offering a new, streamlined “featherweight” UI, which updates the browser’s visual appearance to look much like the new versions its competitors have been pumping out of late. This new featherweight design sees Opera shedding buttons and expanding its display space, among other things. According to Jan Standal, VP of Desktop Products, this was because users were reporting that Opera was slower than other browsers, but now with this lightweight iteration, Standal hopes that becomes a thing of the past. Thanks to an overhaul of its core code and software graphics engine, Opera is now touting a 10 to 15 percent upgrade in speed on SVG rendering.

What’s more, Opera 11.50 touts updates to the browser’s unique shortcut, called “Speed Dial”. Speed Dial, for those unfamiliar, is designed to make it easier to access your favorite and most-visited sites. Instead of thumbnails and links to these top sites, users can now embed and incorporate extensions into Speed Dial shortcuts to get weather at a glance, for example, just by opening a tab. (A seemingly suped-up version of what it’s like opening a new tab in Chrome.)

Users now have unlimited dials and the extension automatically adjusts its layout to fit the browser display screen, but users have the benefit of layout adjusting and a configuration menu with an updated zoom slider. And, interestingly, Read It Later, Webdoc, The Hype Machine, and StockTwits are among the companies and apps whose built-in extensions Opera is touting as part of its newest release.

Extension Product Manager Arnstein Teigene explains Speed Dial’s added functionality by way of example: “Take for example StockTwits.com, which now serve their users updates on trending stocks, live as they happen, directly into speed dial. Or the Reddit extension a fan made. It gives you instant notifications from your Reddit account on speed dial. As if Reddit wasn’t addictive enough.” Amen. Most of us are already in Reddit Rehab.

Other updates featured in the 10.50 release are new password synchronization, in which users can use Opera Link to synchronize your website passwords with other Opera browsers. As Opera says, “it’s perfect for checking Facebook quickly when you’re supposed to be working”.

Opera’s release also claims that its team has “fixed thousands of bugs and upgraded to our newest core rendering engine”, including tweaks to software graphics engine, like faster CSS and SVG rendering. And for developers intrigued by all this new HTML5 watchamacallit, Opera’s new version “adds Session History and Navigation, the W3C File API, classlist and the element” to its HTML5 support.

So, I guess that’s why Opera’s mothers are proud. Clearly, there are some much-needed updates to the underdog browser herein, but the question remains: Will you be proud of the new Opera? Let us know.