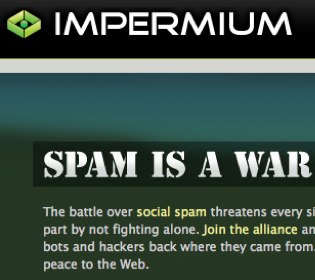 The world is getting a first look at Impermium, a new startup that aims to help sites fight growing user generated spam – spammy comments, hacked accounts and (my personal favorite) fraudulent registrations.

Sounds like a useful service. And the team behind it just makes it more compelling. CEO Mark Risher was known as Yahoo’s “Spam Czar” until he left in June 2010. Joining him from Yahoo are Vish Ramarao and Naveen Jamal. These guys have seen, and fought, a lot of spam over the years.

Investors seem to think Impermium is onto something, too. The company is announcing their first round of funding today – $1 million from Accel Partners, AOL Ventures, Charles River Ventures, Freestyle Capital, Greylock Discovery Fund and Morado Ventures. Angel groups Archimedes Capital and Embarcadero Ventures also contributed to the round, says Impermium.

Companies can use Impermium as a service to detect and remove fraudulent and spammy content. To date they’ve been testing the service with ten or so websites that reach more than 50 million combined unique users. 50 million pieces of content have been analyzed, says Risher, and they’re feeling pretty good about their ability to root out the bad stuff. Livefyre and Posterous are among those intial beta testers.

Part of what makes Impermium work well, says Risher, is that they can analyze content across multiple partners to detect previously unknown patterns. Rules based approaches to spam don’t work well, he says. Instead they’ve developed a machine learning based approach that looks at single site traffic as well as different types of traffic across the entire network to find patterns, anomalies and suspicious transaction groups.

We’ve asked Impermium if they’d work with us on CrunchBase to help flag spammy edits to that site before human review. That’s something we’ve struggled with, and the problem seems to grow exponentially over time. If they agree, we’ll post results here on TechCrunch.