As popular as sports are, and as popular as the Internet is, it’s always been a bit odd to me that the two haven’t intertwined in a completely successful way just yet. That’s why it’s always nice to hear about mergers between the two sides. And that’s exactly what beRecruited and Fanvibe have apparently just completed.

As of tomorrow, beRecruited will officially acquire Fanvibe, we’ve learned. With the deal, Fanvibe’s Vishwas Prabhakara will become the new CEO of beRecruited, and Art Chang and Joe Pestro will come over in the deal, we’re told. Prior to their current roles, Prabhakara was at ESPN and Digg, while both Chang and Pestro were at Yardbarker.

BeRecruited is the web’s largest sports recruiting network, with some 81 percent of all U.S. high schools signed up on their network. They also count 68 percent of NCAA coaches among their ranks. Athletes pay a month subscription fee for premium features, which has led to seven-figure quarterly revenues, we’re told.

“I’m excited to take on the CEO role at beRecruited, and Fanvibe co-founders Art Chang and Joe Pestro are pumped to be leading product and engineering for beRecruited.  We’re big believers in using technology to improve people’s lives, and beRecruited is doing just that, helping millions of high school students pursue higher education.  The traction, solid business model and great investors made our decision to lead beRecruited pretty easy,” Prabhakara says, in confirming the deal.

He notes that Fanvibe (which was previously called Fanpulse) will continue to operate with its roughly 100,000 users. “We also plan to leverage the Fanvibe platform to the extent we can in improving the beRecruited platform,” Prabhakara says, also noting that the impending NFL and NBA lockouts make things a bit cloudy at the moment.

“beRecruited is far and away the largest recruiting network on the web — and it has consequently become a really great business. With the Fanvibe acquisition, we are thrilled to move headquarters to San Francisco and have Vish, Art and Joe lead the business into its next phase. They are perfect fits as they all have strong backgrounds in sports, product and social web,” beRecruited founder Ryan Spoon says. He currently works for Polaris Venture Partners, though they were not involved in the deal.

Terms of the deal are not being disclosed, but Prabhakara says that “we are very happy with the outcome for ourselves personally and for Fanvibe’s investors.” The service had previously raised money from individual investors as well as Y Combinator. 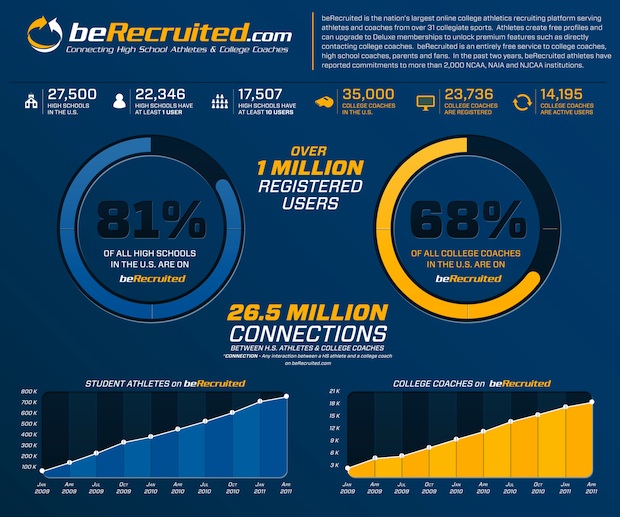