Skype is being criticized for terminating employees immediately prior to the closing of the Microsoft acquisition, and people are assuming they’re doing this to keep the value of those employees stock options. Skype’s response boils down to saying that the employees were fired because they weren’t good employees, and that the value of the stock is negligible and didn’t affect the decision making process.

Ok. But it gets worse.

Employees aren’t even able to keep the vested portion of their stock options. The vast majority of stock options granted to startups have a vesting period, typically four years, with chunks of those options becoming vested during that four year (or whatever) period. If options are vested you can exercise them, pay for the stock and own that stock. At least that’s the way things have been done over the decades.

Skype did things differently. With Skype stock options the company has the right to not only terminate unvested options, but also vested ones. And any vested options that you’ve exercised (meaning you paid cash for them) that were turned into actual shares could simply be bought back by the company at the price you paid, regardless of their current value.

Here’s the relevant language in the stock option grant agreement. It refers to a Management Partnership agreement which isn’t public and it’s unclear if employees ever get to see it (my guess is not):

If, in connection with the termination of a Participant’s Employment, the Ordinary Shares issued to such Participant pursuant to the exercise of the Option or issuable to such Participant pursuant to any portion of the Option that is then vested are to be repurchased, the Participant shall be required to exercise his or her vested Option and any Ordinary Shares issued in connection with such exercise shall be subject to the repurchase and other provisions in the Management Partnership agreement.

And here’s the letter the employee received when he was terminated: 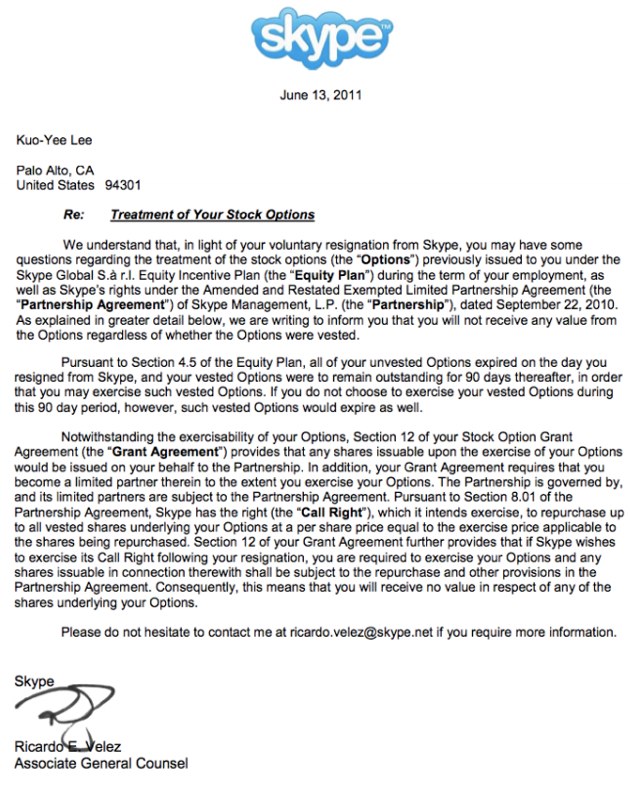 This isn’t the first time I’ve seen a stock option plan like this. I actually worked for a company once that used the same mechanism. I dug up the clause from that agreement, which I kept because it was so audacious. Here’s the relevant clause – it says much the same as the Skype documents but in slightly more understandable language:

Until now that company I worked for long ago was the only example of this type of clawback provision that I’d ever heard of. The reason that company added that clause is that they didn’t want any outside shareholders, including ex-employees. If there was a liquidity event, fine, employees got the stock upside. But if they left or were fired before a liquidity event, they got nothing.

There are only two real reasons for doing this. The first is that the company anticipates a long period of being privately held and doesn’t want to deal with outside shareholders. The second is that they don’t want to give away too much equity in stock options. Since they can take back the options of anyone who leaves, they can give equity more freely to employees coming on board.

There’s a tradeoff, of course. If employees understand what they’re signing they will want a lot more compensation to work there – either a higher cash salary or a ton more options. Because they know the likelihood of payout is so small.

If, for example, Facebook’s option plan was structured this way. all the early guys that left and founded companies like Quora and Asana would not have made any money at all (billions of dollars in value would have flowed back to Facebook). Multi-billionaire Sean Parker, who was president of Facebook for a time, wouldn’t be a multi-billionaire. Or any other kind of billionaire.

The fact that Skype adopted this plan in the first place isn’t in itself “evil.” But they’ve done two things wrong from what I can tell.

First it appears that employees had no idea what they were signing and they probably expected it would be a normal stock option type deal that everyone in Silicon Valley has done for decades. If Skype wasn’t crystal clear with them, and explained it in normal human language that they understood, then these employees were intentionally misled. Skype had an incentive to make things unclear, because employees would demand far more compensation if they had understood. The fact that employees are so surprised that this is happening suggests that they didn’t understand the agreement. This is what lawyers call fraud.

The second thing Skype did wrong was not to waive this clause with the looming acquisition. The company can deny all day long that they fired these employees for cause, not to save a few dollars on stock options. But the appearance is the exact opposite.

These employees should simply hire a lawyer to sue Skype. There’s a valid fraud claim based on what I’m seeing, and the “atmospherics” (how lawyers describe the legally irrelevant facts surrounding the story that can nonetheless influence a judge and jury) are terrible for Skype. Also, Skype has to wrap up this deal. My guess is they’d just settle immediately and pay out on the vested part of the stock options.

Get Ready For More Of This

I bet that dozens of lawyers, venture capitalists and CEOs, now that they’re aware of this, are thinking “Hmmm, not a bad idea. We should do that.” And as long as they are crystal clear in their communications with new employees that these stock options, which are already a long shot, are likely to be extra-worthless, they’re probably in the clear legally. Then it’s up to the employees to take a stand. Or not.