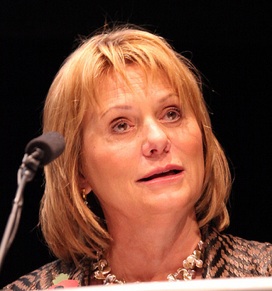 Yahoo CEO Carol Bartz got an earful yesterday at the tail end of the company’s annual shareholder meeting. An angry shareholder, who identified himself as Steve Landry—an advisor to institutional investors with “millions of Yahoo shares”—stood up at the end of what was up until then a surprisingly feel-good affair, given the total underperformance of the stock for the past three years, and asked for her head. We’ve uploaded the audio clip below.

He goes through a list of issue and concerns, calling Yahoo a “debacle” and a “circus.” He starts out by addressing “the elephant in the room”: the search for Bartz’ successor.

“It came out earlier this week in a blog that the board is secretly talking to other CEO candidates,” he said. “I have heard similar details. I believe it is true. The last thing Yahoo needs right now is a lame duck CEO. The buyout talks over your contract need to start today.”

Hmm, I wonder which blog he’s talking about

Landry also brings up the Hulu acquisition rumor (which was wrong) and suggests Jason Kilar could be a good CEO candidate for Yahoo. But he thinks buying Hulu would be a bad idea.

He finishes by calling on the board to break up or sell the company. “The status quo is no longer working,” he says.

To all of which, Bartz responds: “You’re welcome, and thanks for your opinion, the bloggers’ opinions and the rumors. What else? Wonderful. That was certainly a downer.”

Listen to Landry’s entire diatribe below.