When OpenSky launched a year ago, it was a commerce platform for influential bloggers. Bloggers with a following would curate their own merchandise, OpenSky would source the goods from manufacturers, and split the profits with the bloggers.

It sounded a hell of a lot better than the miniscule affiliate fees most bloggers were used to, but it didn’t work out. It never got past 5,000 bloggers with a reach of 100,000 unique visitors. “Mixing content and commerce was confusing to people,” says CEO John Caplan.

By November of last year, Caplan decided to start over with a slightly different concept, which OpenSky has been testing since January, and opened up more fully in April. Instead of being distributed across 5,000 blogs, OpenSky is now “a social network for commerce.” It is now its own destination with 50 celebrity curators from chefs like Bobby Flay and Tom Colicchio to supermodel Veronica Webb.

With no marketing, in the space of a few weeks, OpenSky is now up to 200,000 members and one million unique visitors. Those members have created 800,000 connections, meaning they follow on average 4 curators each.  And with only 50 curators instead of 5,000, it is selling hundreds of thousands of dollars worth of goods every week. Caplan describes it as “Twitter meets HSN.”

Just like the bloggers before them, the celebrity curators pick items to recommend to their followers, and OpenSky sources the products from the manufacturers.  Followers can buy the products directly from the site. It’s like buying from Bobby Flay, often with a discount.

Some of Flay’s recommended items include a Viking immersion hand blender, a mortar and pestle (good for crushing dried hot peppers and making guacamole), and a chopping block. In the space of a few weeks, Flay now has 60,000 followers on OpenSky. Many of them come from his Twitter account, where Flay has 294,000 followers and promotes his OpenSky items. Curaters like Flay split the profits with OpenSky.

Celebrity-endorsed commerce is certainly in vogue right now. BeachMint recently raised money at a $150 million valuation.  If OpenSky can make its social shopping concept work this time, the sky’s the limit. 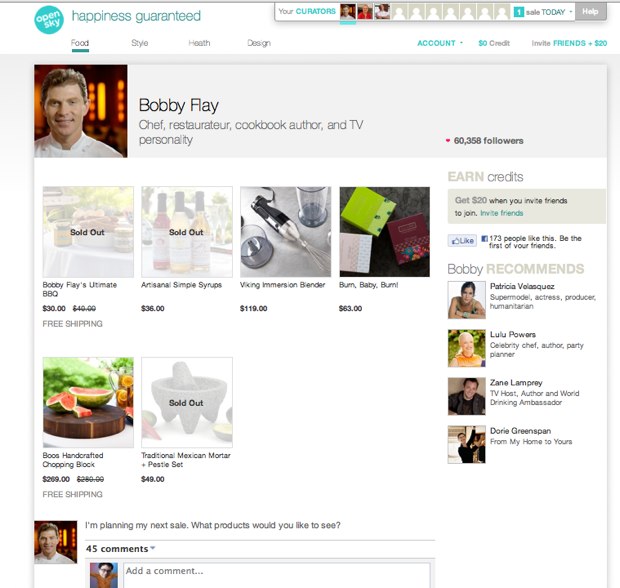