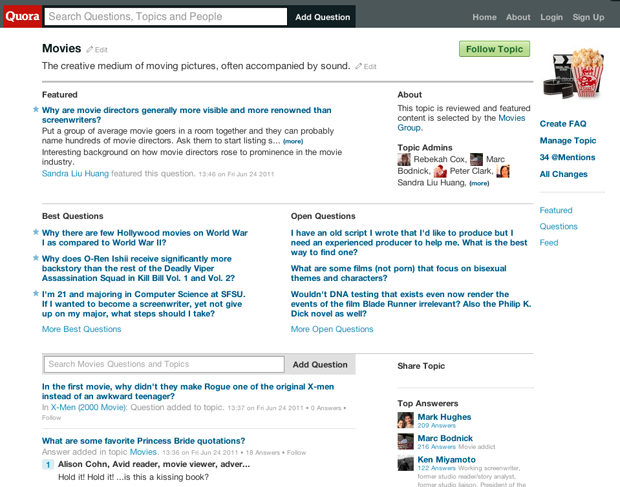 Quora has just announced a redesign of its Topic Pages and the introduction of Topic Groups, aiming to make information discovery and navigation on the site a little bit easier. The motivation behind these changes is a thrust towards ease of search and content relevancy on Quora, as there is currently a ton of content on the site that people need to figure out how to navigate.

Now, instead of a chronological stream on Topics Pages (which you can get to via the tags in questions), users will see Best Questions, Open Questions as well as Featured Questions and Frequently Asked Questions depending on the topic.

A Topic Page can also correspond to a Topic Group which will be focused on all the activity on the Topic Page and can roll up multiple topics into one, giving users a way to self-organize and share info. For example this Movies Group corresponds to this Movies Page.

Quora co-founder Adam D’Angelo likens the difference between and Topic Page and a Topic Group to the difference between a Wikipedia article and a Wikipedia Talk page, where the Talk page features the activity of a group behind the page that is committed to the topic, moderates questions and features content. The page is just an outpost of the total sum of the group’s knowledge.

“If you’re someone who doesn’t know about a topic, now you can get a general overview of what the topic is about on a Topic Page,” D’Angelo tells me, saying that the Topic Groups will be the space for people who want to delve deeper.

Some Topic Groups will be official (you can see a list here) i.e. moderated by a group of admins with topical expertise, while others will simply consist of all incoming activity to a Topic Page. 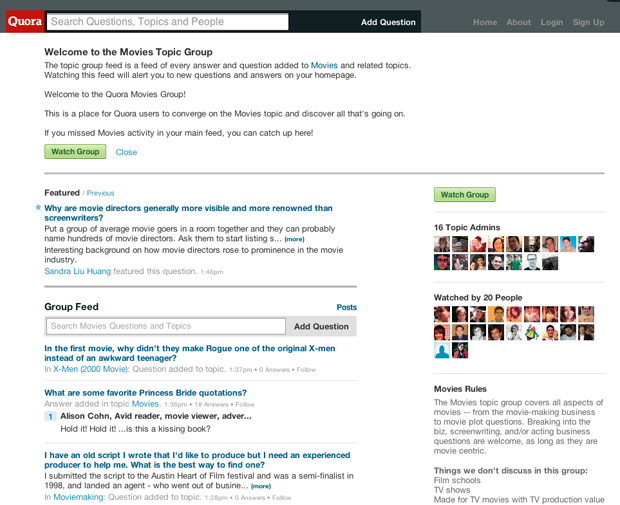 D’Angelo writes, “We’ve had a lot of activity on Quora recently with screenwriters and other people in Hollywood. Now there’s a well-defined space for them to focus on movies without being distracted or interrupted with everything else that they’re interested in on Quora. In general, this structure will let us have deeper communities and topic areas.”

Says power Quora user Semil Shah, “[On Wikipedia] you have topics and you move from page to page, like nodes. Here, in Quora, the topics are organized in a way one can eventually drill down and explore, investigate. It’s genius.”

Despite having no user numbers to announce, D’Angelo tells me that the design and organizational changes were the result of having to look closely at what worked and what didn’t after Quora grew faster than expected last winter. The service’s eventual goal is to get more knowledge on to the Internet, get more questions and get more answers, D’Angelo said.

Also in the information discovery and relevancy vein but on the opposite end of the spectrum is the delightful newly launched Quora Shuffle Button, which lets users view random content on Quora a la StumbleUpon. You can find the unassuming Shuffle button at the bottom of each Quora page. Baby steps.