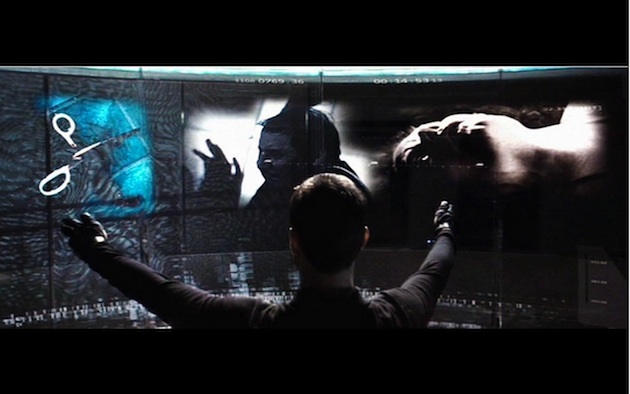 “This is the next Macintosh-level of disruption.”

Over the past several years, I’ve followed pretty much every new thing in the technology space, and written about many of them. But it’s hard not to get cynical when so much of what’s out there is not only not revolutionary, it’s often not even evolutionary. Instead, much of what I see is simply derivative and quite frankly, boring. But every once in a while something crops up that is truly game-changing. And it restores my faith in technology. That’s the best way to describe what I saw when I met with Oblong Industries this week.

The technologies that Oblong is working on are anything but derivative or boring — they are absolutely revolutionary. And they will shape the future of computing.

I understand that such statements sound like absolute hyperbole — especially from a guy who has written about the death of the mouse a number of times. But I would encourage you to skip to the bottom of this post and check out the videos. I’m going to attempt to explain what I saw and talked with Oblong CEO Kwindla Hultman Kramer and Chief Scientist John Underkoffler about. But the only way to truly do the technology justice (beyond using it) is to see it in action.

If you recognize Underkoffler’s name, it’s perhaps because you saw his TED presentation last year. He wowed the audience by showing off the g-speak SOE (spatial operating environment) technology that Oblong has built. And if that looked familiar, it’s because Underkoffler was also the guy who advised the filmmakers behind Steve Spielberg’s 2002 film Minority Report. Yes, all of those kickass gesture computing scenes are his work. And over the past decade or so, he’s been working to bring that technology to the real world with Oblong. And they’re getting close. Really close.

Following the TED talk last year, I wrote a post noting that I had seen a brief demonstration in 2008 in Spain that I wasn’t allowed to talk about. The demonstration was of Oblong’s technology. And it was awesome. But it was just a video demonstration. Two days ago, I got to actually see and use the first system Oblong has built. The product is called Mezzanine, and it’s what Kramer calls “Oblong’s first shrink-wrapped turn-key system”. “It’s the first slice through the technology stack we’ve been developing over the years,” he says.

Mezzanine is a spatial operating environment meant to be used in conference rooms and other large meeting areas. The peripherals vary, but the system I used consisted of three large screens front and center, two vertically-aligned screen on a wall to the right, a whiteboard to the wall on the left, and two cameras (one in front pointing at you, and one to the side pointing at the whiteboard). The main points of interaction are two “wands”, which I’ll explain more about in a bit. And the system works in concert with any device — meaning laptop, iPhone, iPad, etc — that is in the room and connected to the network as well.

The idea for Mezzanine is to get people in a room together in order to synthesize information in the most collaborative way imaginable. “We want to get everyone’s pixels in a shared workspace, where they collide,” Kramer says. “The key is to give everyone control over what’s happening,” he continues. And that means interacting with the data on the three main screens from your laptop, iPhone, iPad, directly on the screen with the wands, or even remotely via a device with a web browser.

Using these controls, anyone can rearrange data, push new data into the flow, highlight specific things, and queue stuff up to talk about later. Perhaps the best way to think about it is as a symphony of information that everyone in the room can conduct. Again, it’s a bit hard to describe, but when you see it, it just makes sense.

And it just works, to borrow from the Apple-esque way of thinking about products. I picked up one of the wands and within two minutes I knew exactly what I was doing. I could transfer data around the screens. I could zoom in to certain data. I could crop and manipulate other data. I could zoom out for a full view of all the information available. It’s unbelievable how natural it all feels. The next time I have to use PowerPoint for a presentation, I’m going to want to shoot myself.

Speaking of the wand accessory, the best way to think about it is to think of a Nintendo Wiimote on steroids. It’s a bit like a Wiimote that is much more accurate and insanely more functional. It has three sides that, depending on which is facing upwards in your hand, does different things. You move it around in your hand, switching the sides, to do different things. One side allows you to grab data for example, while another allows you to take control of the data. For example, maybe you have Photoshop open on a computer attached to the Mezzanine system — you can use the wands to directly manipulate it right on the big screens in front of you.

And the wand is a fully spatial device. You can point it upwards and use it as a push/pull lever of sorts. It’s really cool.

But why use a wand and not your hands, a-la Minority Report? Because we’re not quite there yet, Underkoffler explains. Well, let me rephrase that. The technology is there, but it’s still too expensive to implement on a large scale. And it still requires gloves to ensure pinpoint accuracy. Yes, the Microsoft Kinect does some of this, but that’s fairly rudimentary compared to what Oblong is aiming for. “As a company, philosophically, we’re absolutely commited to high fidelity and high-end experience. The commoditized stuff isn’t there yet,” Kramer says.

Still, both Kramer and Ubderkoffler agree that consumer technologies like the Wii and the Kinect are perfect in helping to transition people over to these future concepts of computing. Kramer also singles out the multi-touch first used in the iPhone and now on display in the iPad. “We really do think the mouse goes away over the next few years,” he says.

“Remember, the applications built for the mouse took a while to be perfected,” Kramer says. “The mouse wasn’t really pixel-perfect until the end of the 1980s. And even then, the consumer class were not there,” he continues, noting that just as the mouse evolved into the tool it is today, touch and gestures will be next. 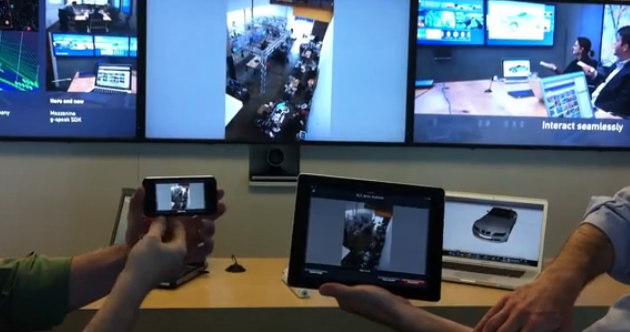 “You have to solve a bunch of new UI problems when you commit to this type of thing. Our goal in general is to change the way everyone in the world uses computers,” Kramer says. “This is the next Macintosh-level of disruption,” he continues (to bring my quote used up top back into context).

But first, Oblong knows they need to be able to bring relatively affordable products to market. And again, that’s what Mezzanine is all about. “Our goal here is to change how people work together,” Kramer explains in a slightly (but only slightly) less ambitious statement. With Mezzanine, they set out to create something that’s both a “lean forward” and “lean back” experience — meaning you can watch and interact. “Corporate IT departments are leery about installing new things on laptops,” Kramer notes, explaining why they created a web control interface for computers connected to Mezzanine. For devices like the iPhone and iPad, they have native applications to interact with Mezzanine.

And the flip-side of this is comfort levels, Kramer says. “You want to be able to walk in a room and use the system whatever you have with you device-wise,” he says. Or if you have nothing with you, that’s where the wands come into play as well.

Talking to Kramer and Underkoffler, you really get a sense of just how much thought was put into this system. For example, Underkoffler brings up the “John Malkovitch problem” (referring to the film Being John Malkovitch which has a scene in which everyone in the world is John Malkovitch). You don’t want to capture a part of the screen being presented and end up re-presenting a piece of the presentation. Again, all of these kinds of things had to be solved on the backend and UI levels. Underkoffler says they’ve solved almost everything, but there’s still work to do perfecting this future of computing.

“We build the software infrastructure to take advantage of where this stuff is going to be,” Kramer says. “The single adjective we care most about is ‘capable’. With our software, we want to provide an enormous way of proving how capable things are,” he continues, comparing what they’ve built to a piano. “Anyone can sort of play a piano. We’re building the UI to emit a virtuosic performance,” he adds.

The third big part of Mezzanine is the app server. Essentially, Oblong will allows developers to write their own Mezzanine apps, and they have an SDK for it. This is something they’re really excited about — to see what others come up with. Along those lines, the plan right now is to release the entire g-speak platform (which again, powers Mezzanine as well as the Minority Report-stuff you’ve seen) for non-commercial use this fall.

Mezzanine itself is already being used by a handful of big early partners (Boeing, for example), but the plan is to formally launch it this fall as well. Kramer declined to give pricing specifics, stating that they’re still fine-tuning them. But Mezzanine is something you’ll buy in full from Oblong, and if you need support, they’ll provide that. Again, the target market is broadly “meeting rooms” — but drilled down, they expect Mezzanine to be used in everything from board room meetings to engineering meetings to creative meetings to sales meetings.

With just the partnerships they have in place, Oblong is already cash-flow positive (and have been since last year). They haven’t raised money since the $8.8 million Series A in 2007.

Okay, Mezzanine is spectacular, but when are we going to see this stuff in our homes? “We believe the same experience we enable in the work place should be available in your living rooms,” Kramer says. “All of us who read TechCrunch have a reasonably large amount of screens we use, so we need to get there,” he continues. At the same time, “we’re not nearly finished,” Underkoffler adds. “It’s fair to say it will be about three years until this is fully into consumer electronics devices,” he continues, noting that the biggest inhibitor is simply cost and bringing it down to a reasonable level for consumers.

The video below will show you Mezzanine in action as I saw it. Note the little things, such as the manipulation of the car on the big screen with the wand and how that moves the car on the laptops in realtime. Again, it all just works. Also watch for a quick demo of a wand-less gesture-based system that Oblong hopes to release soon for retail signage and other breakout-room type situations. Below that, find the g-speak demo video that many people have already seen.