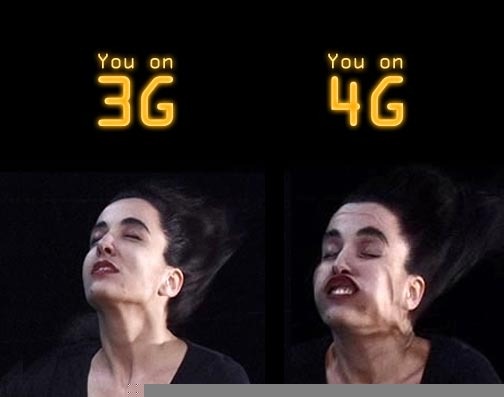 There’s been a lot of hype around 4G of late, with talk about how the new network standard provides increased speeds, better device functionality, and all that jazz. But is 4G a term that actually has real world meaning, or is it just some place-holding buzzword used by marketers to stoke consumer excitement over buying a new phone?

Today, 4G really seems to have become synonymous with speed, and carriers are spreading the message of “network upgrades” from 3G to 4G as being just that — a step up in speed and functionality. And certainly, while enhanced network capabilities do seem to be a part of the new 4G network standard, carriers are getting away with not telling the whole story.

Now, in the big picture, while 4G is indeed meant to refer to the fourth generation of cellular wireless standards (as the successor to 3G which arrived in the early 2000s, which succeeded 2G in the ’90s, etc.), clearly the definition and implications of 4G have become somewhat equivocal. There’s the technical definition and the non-technical definition. Just as Timothy Butler points out in Open For Business, Sprint and Verizon generally get closest to meeting the actual technical criteria for 4G with WiMAX and LTE, respectively. But, T-Mobile and AT&T, meanwhile, seem to be stretching the definition to include their upgraded 3G networks, he says, on the (arguably shady, I’d say) basis that the speeds are faster than traditional 3G networks.

But the question then becomes: Even with all this hype, this equivocation, are we, as consumers, buying this (literally and figuratively)? Are we champing at the bit to buy a new 4G device anyway, or have we been burned too many times and know buyer’s remorse all too well?

Morpace, a market research and consulting company, released an interesting report today designed to provide a bit of insight into these questions, hoping to discover whether or not the improvements of 4G networks over their predecessors play a significant factor in the purchase decision for a new phone or plan and just what the current perception of the 4G brand in today’s marketplace.

As one may expect, the number one factor for consumers in deciding whether or not to buy a new phone or device was price. Many people are still feeling the sting of the recession and just aren’t willing to upgrade to 4G if it means paying a lot. However, while price was selected as the number one factor for consumers when selecting their current cell phones (61 percent of all those polled), the second most significant factor in device purchase was network capabilities. 58 percent of consumers reported network capabilities as contributing to their decision, versus other phone features like touch screen capabilities, screen size, and brand name.

Again, when asked as to the most important factor when selecting a provider, terms of contract excluded, 29 percent of consumers cited the data plan prices as the top influencer. Somewhat surprisingly, network speeds were the most important factor to only 5 percent of respondents, especially given the attention that many providers have given to that feature in ad campaigns. (Ahem, T Mobile.)

But perhaps the most interesting piece of data? While consumers across the board recognize that it means to have extensive network capabilities, only 18 percent with smart phones currently have 4G capabilities. 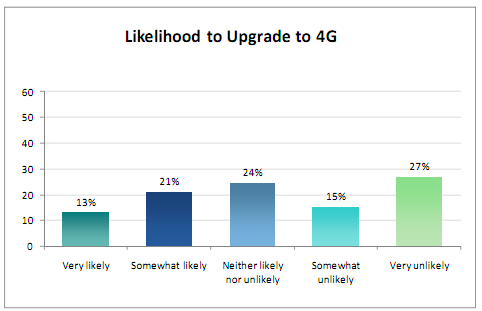 Now, as to the current perceptions of 4G, Morpace found that, while over 50 percent of consumers with smart phones “identified increased downloading and Internet browsing speeds as significant features” of the new standard (and these numbers are strong for a new technology), 48 percent of respondents were still unable “to identify the main benefits of 4G networks”, the report said. Not only that, but only 40 percent of those polled said they would be willing to pay a premium to have 4G.

Some other interesting data points: Only 33 percent of consumers are likely to upgrade to 4G before their current contract expires, though this number does increase to 37 Percent among people aged 18 to 54. Also, a somewhat interesting and perhaps counterintuitive stat — smart phone users who make under $50K are significantly more likely to upgrade to 4G even if it means paying more. Probably because most of those people fall into the younger age group.

All in all, these are somewhat surprising stats for 4G advocates. It seems that two-in-three consumers are not willing to upgrade their contracts for 4G, with 60 percent of consumers unwilling to pay more to upgrade — period. One-third of those consumers do not even perceive 4G as necessary.

That being said, the irony here is that, of those polled who actually have 4G networks, 83 percent were satisfied with their service. Now, this could just be smugness on the part of geeks, but I don’t think so. Clearly, carriers and service providers could do a much, much more comprehensive job of explaining to consumers what 4G actually is and what the benefits are, beyond “OMG-super-fast-sexy speed!”

Image attribution: (From what I can glean) Gizmodo