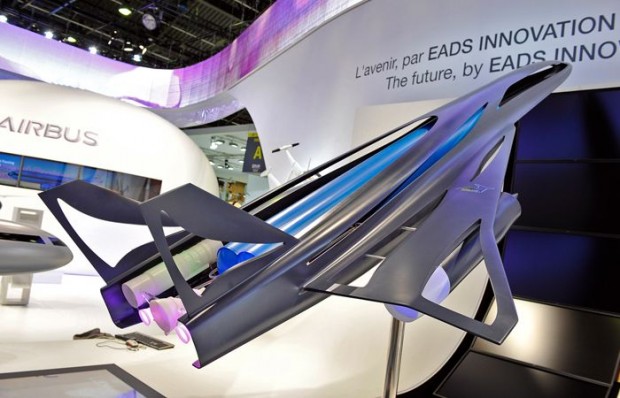 Airbus’s parent company EADS just unveiled the Zehst concept plane at the Paris Air Show today and it is seemingly stealing the show in a big way — and it’s not going to be here for another 40 years. The Zero Emission Hypersonic Transportation is being called “The Hypersonic Heir To Concorde.” Where in the ’60s-era Concorde did London to NYC in 3.5 hours, the Zehst can theoretically do it in just 90 minutes while emitting just water vapor and not causing a window-shattering sonic bomb.

The crazy Mach 4 speeds are achieved through a three stage process. Conventional jet engines are used to allow the plane to takeoff from a normal airport runway and avoid the Concorde’s hated sonic boom. Once at the appropriate altitude, rocket engines would propel the aircraft even higher and faster allowing for the ramjet engines to takeover. These engines, which cannot be used from a standstill, are normally used for missiles and would, at least in theory, allow 100 passengers and crew to hit a cruising speed of 3,125 MPH six miles above the Earth.

This would allow for a London to southern Spain flight of just 20 minutes. London to Istanbul would take 30. London to Tokyo? A mere 2 hours.

The plane is said to be fueled by seaweed-made biofuel, which is comprised of just hydrogen and oxygen and emits just water vapor. The Zehst is just a concept but one that’s been in the works for a while. 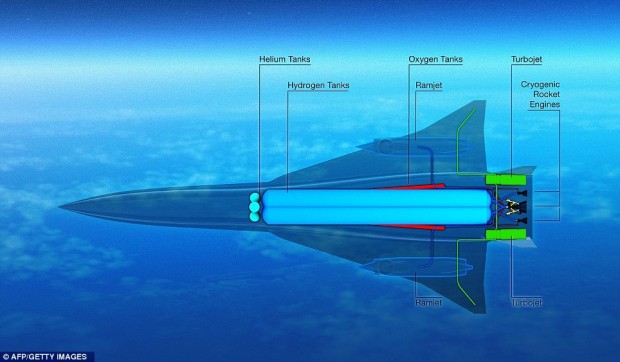 Jean Botti, innovation and technology director at EADS, [via The Daily Mail]

‘‘It is not a Concorde but it looks like a Concorde, showing that aerodynamics of the 1960s were already very smart.

The plane would fly just above the atmosphere, meaning it could fly at more than 3,000mph.

When you are above the atmosphere nobody hears anything. We’ve been working on this project for long enough now to know it is viable.

The plane is still a few years away — 40 years, really. That is of course if the suits or bean counters at EADS don’t kill the project before hand due to cost, limited market, competition, global recession, or the development of instant teleportation. What they should do is drag the Concorde’s engineers out of retirement, replace their slide rules with a server farm and have them develop the damn thing. If they could build the Concorde without the aid of computer design and virtual testing way back in the ’50s and ’60s, they could probably pump this thing out by Christmas 2011.