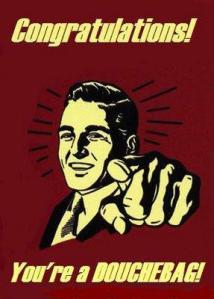 Anyone who was in the Valley during the late 1990s knows exactly the guy I’m about to describe. He wore blue shirts and khakis. He was a regular at the Bubble Lounge. He always insisted on grabbing the check, throwing down the dot com AmEx for everyone’s drinks, making sure everyone knew he did and later bragging about dropping “several C notes last night.”

He was a business school drop out, who thought that gave him enough cool points to negate the fact that he was lame enough to enroll in business school in the first place.

He hogged the Razor scooter at your cavernous loft-like office, was way too loud when he won at foosball, took up all the restaurant reservations and cabs in the city, drove up the rents to unsustainable levels and generally made everyone else’s life miserable. Worse: He was frequently seen as the most important person in the startup.

Thank God he left in droves once the bubble burst. Even better: He never came back.

But as happens with hot markets, there’s a new douchebag in town. We’ve written several times about how easy it is now to start a company in the Valley, and this new gold seeker isn’t the biz dev guy. He’s the knock-off wunderkind.

Paul Carr has described him as the Mark Zuckerberg tribute band: The kid who wears a hoody and tells people his company will be worth $1 billion dollars, but won’t give you any details on what they do. I’ve described him as the tribute band for the Aaron-Sorkin-fictionalized-version of Mark Zuckerberg: The kid who tries to talk fast, sound witty, but say absolutely nothing. The guy who thinks it’s fine to screw people over, because the startup journey is all about you, the almighty founder. The kid who shows up at 10:30 am for work and plays video games until late at the office, forgetting he was supposed to be building a company all day. He elevates cliched millennial entitlement to an art form.

Fashion-wise, he’s a hipster, frequently with floppy hair ala Kevin Rose and Dennis Crowley. The BMW the biz dev guy drove around has become a bike. (At least that’s a win for the environment.) And if my morning coffee run is any indication, he’s always at the Creamery talking just a bit too loudly about his company. Once I overheard two of them in a heated debate over whether or not Farmville was the most important development we’d seen in our lifetimes.

But here’s the real problem with him: Like all gold-rushing douchebags of any era, he’s not starting a company because he believes in it. You can tell because there’s no great idea there, rather it’s a collection of buzzwords and phrases like “We’re the (fill in the blank) of (fill in the blank). With badges.” And he’s happy to abandon his company if something shinier comes along. Like a wet Gremlin, he’s multiplying like crazy right now. And like all gold-rushing douchebags of any era, there are plenty of people who can’t wait until he leaves. Don’t worry, he will. They always do, and the great entrepreneurs stay and continue to build awesome stuff.

In case you don’t know the guy I’m talking about, the good people at College Humor have done a pretty good job of capturing him in this video. Embedding is disabled on it, which is — appropriately– kinda douchey.