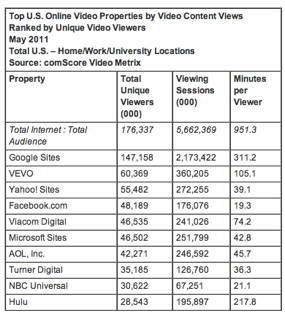 comScore has just released its monthly data on online video engagement, with 176 million U.S. Internet users watching online video content in May for an average of 15.9 hours per viewer. The total U.S. audience engaged in more than 5.6 billion viewing sessions during the course of the month. And 83.3 percent of the U.S. Internet audience viewed online video.

YouTube had previously revealed that the video site is now handling 3 billion views per day, but comScore’s measurement of viewing sessions is different from actual views. We’re assuming a viewing session is measured as sitting in front of YouTube before clicking away, which could include watching 1 video or 10 multiple videos in a single session. YouTube is probably counting individual views.

The U.S. internet audeince viewed a whopping 4.6 billion video ads in May (up from 3.8 billion in April), with Hulu generating the highest number of video ad impressions at more than 1.3 billion (up from 1.1 billion ads in April).

Video ads reached 45 percent of the total U.S. population an average of 34 times during the month. Hulu also delivered the highest frequency of video ads to its viewers with an average of 48 over the course of the month. 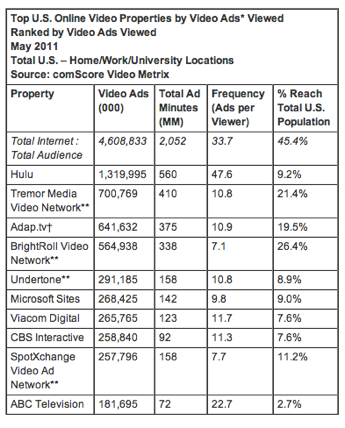