There’s a new name in the online fundraising scene, but it’s already got plenty of users — and a very impressive seed funding round. Meet Rally.org.

Rally got its start some 18 months ago, when the company was called Piryx (we covered their growing popularity as a political donation platform about a year ago). The company has built out what’s effectively a ‘Paypal for fundraising’, giving charities and other organizations a fundraising platform with an integrated payment system. And today it’s announcing that it’s rebranding itself to Rally.org, in addition to a seed funding round with investors who include Flood Gate (Mike Maples), Greylock Discovery Fund (Reid Hoffman) and Ron Conway. The size of the round isn’t being disclosed, but they say it’s a “substantial seed round”.

So what exactly is Rally for?

Rally cofounder and CEO Tom Serres says that one of the issues with fundraising platforms is that many of them only work with non-profits. Rally, in contrast, can support both large-scale charitable causes in addition to less ‘official’ groups — like an initiative to renovate a local park. Serres says that the site is looking to help broaden the definition of what a ’cause’ is, and to use social sites like Facebook and Twitter to help each cause turn their supporters into activists.

The company is describing the old Piryx as something of a proof of concept, and the new Rally.org will incorporate existing features as well as new ones.  In addition to handling the payment processing, Rally is also looking to help causes build strong online presences, with well-designed websites (both for desktop and mobile). The result, as you can see below, looks a lot like Tumblr (note the ‘Donate Now’ and ‘Fundraise’ buttons though). Fans of each cause will be able to create their own blogs associated with the cause. Another key change: the homepage for each cause will now be hosted at Rally.org/CauseName, which means that Rally is looking to build itself into a brand that’s synonymous with fundraising and cause communities.

The site is currently in private beta — you can request an invite from the homepage. Rally currently has 15 employees, and says it intends to close out the year with at least 40. The company is also moving its headquarters to San Francisco.

Rally.org competes in some ways with Causes.com, which has long been helping companies and charities leverage Facebook and other social networking sites to raise funds. 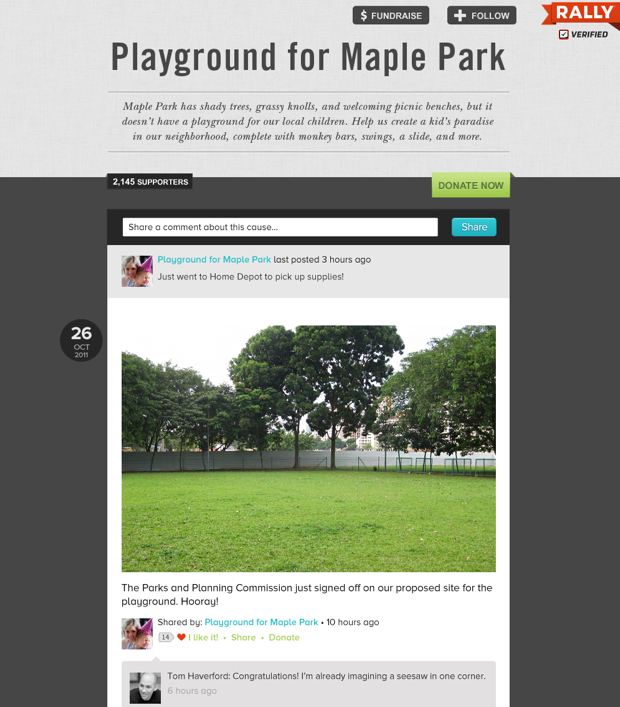