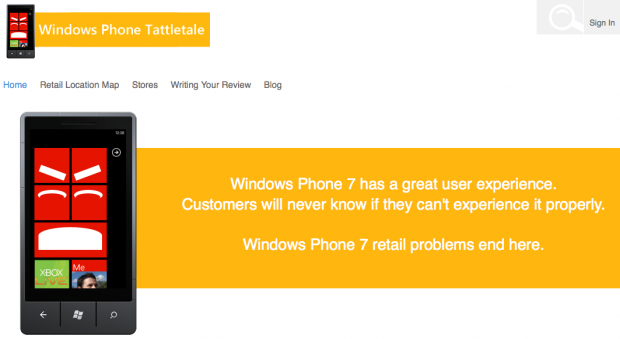 The Windows Phone platform might have a relatively small following now, but there are two things to remember when it comes to WP7 fans: 1) they are just as intense about Windows Phone as Apple fanbois and Android loyalists are over their respective platforms, and 2) the WP7 pack is growing by the minute. But for now, Microsoft’s mobile success has been weak at best, and Windows enthusiast Robert McLaws thinks he knows just who to blame: retailers.

From his experiences, and anecdotal evidence passed along to him, McLaws came to the conclusion that retailers are biased against Windows Phone, or simply don’t know enough about it to lead customers in the Microsoft direction. To that end, he’s created a website called Windows Phone Tattletale, where readers can post reviews of different carrier stores by location, and lay bare all the juicy details of their anti-WP7 experience.

The site is relatively new, so I haven’t found any particularly scathing criticisms of specific stores. However, in a thread titled “Why I Started WPTattletale.com,” McLaws gets mixed responses. Mamacita42 echoed his sentiments, posting, “A T-Mobile rep told me they were no good. Get Android. I told him that’s what I’m trying to get rid of. He didn’t even know the difference between WM and WP.”

ET Jay, on the other hand, was less encouraging. “If WP7 is being treated poorly it is because MS has done a poor job marketing this OS from the start – botched the first update, and started promoting Mango a year early and killed first generation sales. I applaud your desire to promote WP7, but your frustration with its lack of success is misplaced,” he posted.