Grace Chu Lee from Twitter’s Business Development team earlier tweeted out and then deleted a Twitter feature that has as of yet gone unheard of beyond a select few, “Follow Recommendations.” “Follow Recommendations,” which lets you create lists of people you think others should follow, has been around for months we’re hearing but hasn’t been publicized much outside of Twitter itself (Lee calls it a “hidden” feature in the tweet).

Users wishing to take advantage of Follow Recommendations can do so by creating a plain old Twitter list and including the hashtag #WelcomeToTwitter in the list’s description (more detailed instructions in the slideshow above).

Users who sign up for Twitter from your profile will see your recommendations like in the screenshot below. But why would this be useful to anyone you ask? Well from what I’m hearing it wasn’t really intended for hoi polloi, but was mainly marketed to celebrities and brands that have a critical mass of people joining Twitter through their profiles presumably. Which is probably why it hasn’t seen the light of day until now.

When asked if Twitter was sitting on similar hidden features, Twitter Communications Rep Carolyn Penner told me in a DM, “There might be other ‘secret features’ but I don’t know what others don’t know!” 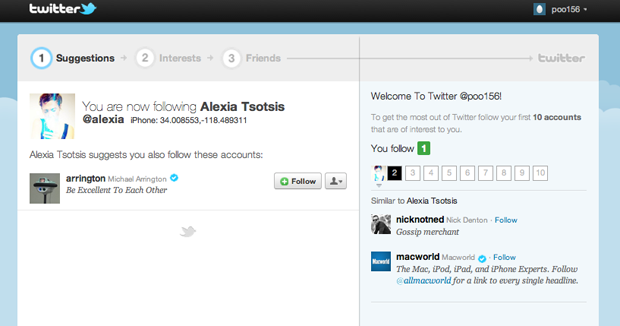