At its worldwide headquarters in Mountain View, Calif. today Google installed 71 electric vehicle charging stations made by Coulomb Technologies. They will be used to power up employee-owned hybrid and electric vehicles (EVs) as well as the company’s GFleet vehicles.

Google plans to install 250 more charging stations on its campus, according to a press statement from Coulomb today. Its goal is to make 5 percent of Google campus parking EV-ready. The project represents the largest workplace charging installation for electric vehicles in the country, Coulomb and Google claim. The chargers will be managed by Coulomb via their ChargePoint Network.

According to a new blog post by Rolf Schreiber, Google’s Technical Program Manager of Electric Transportation: Google will be adding EV models to its GFleet from other manufacturers as they become available; and between the company’s Gfleet and its biodiesel employee shuttles, the company saves more than 5,400 tonnes of CO2, net annually. That’s compared to an equivalent of typical, single drivers of traditional, combustion engine vehicles. Google estimates it’s “like taking over 2,000 cars off the road, or avoiding 14 million vehicle miles every year.

[Ed’s note: What’s next, Mr. Schreiber? How’s about solar canopies over the parking lots to generate power for the chargers?] 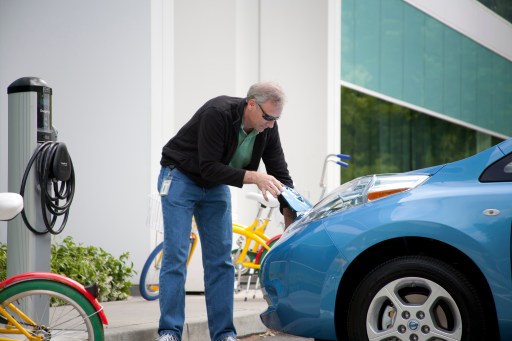 Rolf Schreiber using a Coulomb station to recharge a Nissan Leaf in Mountainview.