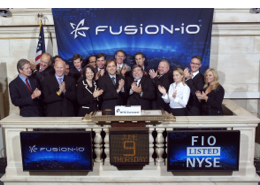 As we heard yesterday, Fusion-io, the developer of flash- memory technology for companies, upped the opening price of its IPO to $19 per share, valuing the company at $1.5 billion. Earlier in the week, the company upped the range f its offering to $16 to $18 per share from $13 to $15 per share. And this morning, company’s shares, which are trading on the New York Stock Exchange under the symbol “FIO,” opening at $25 per share (up 32 percent), which gives Fusion-io a $1.9 billion valuation with 77,809,084 shares outstanding at the time of offering.

Fusion-io’s enterprise flash-based drives help store data in smaller devices and is known for being an incredibly fast data storage solution. And Facebook is a big client of Fusion-io, which has raised $110 million in funding. Another fun fact—Apple co-founder Steve Wozniak is Fusion-io’s chief scientist.

The company is offering a total of 10,755,607 shares in its IPO, raising $233.7 million. Another 1,544,393 shares are being offered by selling stockholders. In addition, the underwriters have an option to purchase up to an additional 1,845,000 shares from Fusion-io on the same terms and conditions.