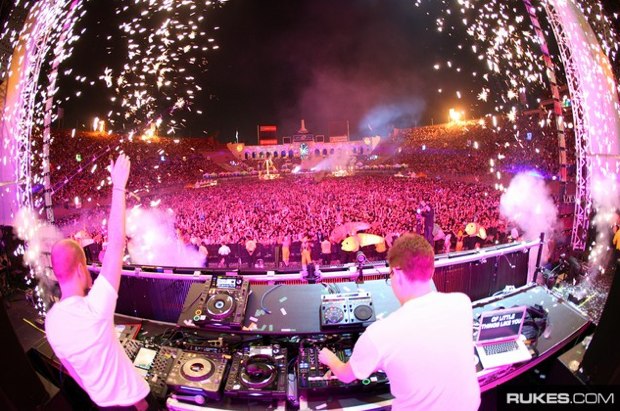 Signing up for Twitter at South by Southwest 2007, I can remember those feelings of “Wow, this is going to be big.” That instant feeling of knowing you’re seeing the future and the world doesn’t even have a clue yet. It’d be years before my friends would finally take the leap and get their own Twitter accounts (even if I knew Twitter usernames in 2007 were like domain names in 1995).

There have been other services I’ve thought would be big, but only one other time in the past four years have I been awe-struck. That other moment was earlier this year (SXSW 2011) when Foursquare unveiled v3 with the “Explore” functionality—I knew that was a life-changer. I’ve dug Foursquare since the early days, but this third version is where it became obvious that every person in the world would benefit from using this service.

The third magical “wow” moment just happened this week, and it’s Turntable.fm. The early adopting tech elites are eating this site up, just as they did Twitter, Foursquare, Instagram, and others. Barring some awful interference, this app is going to break big and change things.

I’m an avid music listener. I crave new music and love discovering new music before most anyone has heard of it, just as I love discovering new startups before anyone has heard of them. When I find a new song or band that I think is awesome, I love sharing it with my friends (and anyone who will listen). What has been missing is the social aspect of being able to share in the listening experience of a song with my friends. So far, I’ve only been able to do this if we’re physically together (at my house or in my car, typically).

I don’t think I was alone in wishing for a service where I could hit play on a song and any friends I can grab online could share in the experience of listening to the song together—and (text) chat about the song in realtime. For years I have had to resort to non-realtime methods of emailing a song link to friends, which typically doesn’t get listened too, because they aren’t necessarily in a situation where they can listen when they see my email. And when they are in a situation to listen, my email isn’t top-of-mind—so I get zilch feedback from them in the “heat of the moment” when I’m dying to play them the song, right this freaking minute.

Turntable is a game changer. When Stickybits didn’t take off the way they hoped, Seth Goldstein and Billy Chasen pitched existing investors ($1.9mm raised) this idea and ran with it. Erick was the first to write about Turntable when he stumbled into a room with Chris Sacca and Hunter Walk spinning tunes, but in summary the concept is what I just explained. You join via Facebook; for controlling growth, you must have a friend on Facebook that is already a user of the service at the moment. After logging in, you browse the different music rooms or create your own. If there’s an open DJ spot (five maximum to a room), you click “Play music” and your avatar transports to the stage. Queue up some songs—they have an extensive library or you can upload your own. Songs played in the room rotate evenly between the DJs. Listeners in the room can then “awesome” a song (and their head starts to bob, and the DJ gets a point) or they can “lame” a song. As users earn more points, they unlock different avatars. Listeners can also add the song to iTunes, Spotify, Last.fm, or their Turntable queue.

The only issue I thought Turntable had was needing to deal with the record labels, but it appears they are licensing the streaming catalog thru MediaNet. Turntable does possibly open up some exposure by allowing users to upload their own tracks, but it seems those (maybe) are only accessible to be played by the uploading user.

As soon as you DJ your first song, you’re addicted. Just as you crave to be retweeted or replied to on Twitter, and just as you crave to have something liked or commented on in Facebook, you crave to have people chat about your song or start bobbing their heads in Turntable. Usage is super sticky—you hang around because you want to play your next track and you’re curious what’s going to play next.

Listening to music has never been this fun. Turntable is also a great discovery tool since everyone is curating all-the-songs-in-the-world to share the very best they’ve ever heard… with you. Oh, and do you remember chat rooms? They’re back. I haven’t used one since the 90s and now I’m non-stop chatting in these Turntable chat rooms and meeting people.

Pandora has some competition. Granted, you can be assured when you play a station on Pandora that the tunes will stay in the same vibe you chose—and if you’re in a work environment, you might want to ensure NSFW tracks don’t play. Pandora lacks the social listening aspect of Turntable though and if there’s only one station playing in your office, Turntable gets everyone’s songs in rotation.

Turntable just introduced a killer feature this morning, the “fan” feature—it’s basically like Twitter’s “follow” feature. When you become a “fan” of another user, you are notified by email whenever that user starts DJing on Turntable. When I know my friend is in a room DJing, I’m likely to join them. The Turntable roadmap has plans for an iPhone app so that not only can you DJ and listen on the road, but at parties with friends you’ll be able to all share the DJ responsibilities.

If MySpace was smart and given a new leash by News Corp, they’d be buying Turntable right now—it would breathe new life into their social network. Turntable doesn’t need them though—the only question is how long they can keep things on the down-low.