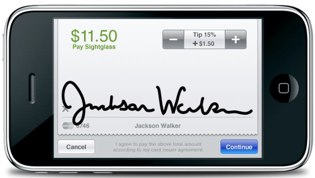 There are a bevy of startups in the process of raising big rounds of capital at billion dollar or higher valuations – something that was a rare occurrence even a few months ago. We’re tracking most of these deals (and have written about the ones we’ve confirmed). Now, we’ve confirmed via multiple sources, is payment startup Square’s turn.

The company is raising $50 million or more, says sources, at a valuation that will likely be north of $1 billion. It’s still fairly early in the process, though, and the company is rumored to be meeting with additional venture and private equity firms to either fill out the round or encourage a higher valuation. But at least one term sheet has been received by the company, says one source.

COO Keith Rabois was in a particularly chipper mood when he sat down with me two weeks ago at TechCrunch Disrupt to talk about how Square is doing.

Which isn’t surprising. The company is on a roll. They’re processing more than $3 million per day in mobile payments, and that was announced prior to their new iPad payments service which can replace the entire cash register system at retail merchants.

To date Square has raised more than $37.5 million (the size of a recent investment by Visa hasn’t been disclosed). The last round, closed in January, valued the company at a rumored $240 million valuation.