I like Jawbone. They’re one of the few companies out there that consistently surprises me which each step they take.

Finding a sustainable business model in selling a series of expensive Bluetooth headsets with marginal, almost-entirely-intangible improvements between iterations? Surprise! Launching a somewhat niche product like the Jambox, then finding success in it by marketing to hipsters and urban kids (markets which largely ignored their previous products)? Surprise!

Making a music video promoting their products that not only isn’t horribly embarrassing or lame, but is actually pretty cool? Surprise! Oh, and the unannounced product they tucked into the video? It’s probably the most surprising bit yet.

You see, we see a bunch of these parody/music-video type things pass through our tips inbox. With a few of the better ones having achieved some level of success in going “viral” (Blyeck. Hate that term), marketing groups around the world simultaneously decided it was the best idea ever, and hit the pavement with the karaoke version of a pop song and a Flip cam in tow. The problem? Most of them are really, really terrible.

Jawbone did a pretty good job here, though, doing right what so many have done wrong. The video quality is nice and professional, whereas most can’t even rival the stuff cut out of a leaked sex tape . The lyrics are slick and the song is performed well — they don’t just cram in too many syllables for the beat and hope no one notices. They don’t make it all about themselves — in fact, with references to Groupon and Foursquare and appearances from things like the Dodocase at 1:07, their own product (the Jambox) almost sort of blends in. Perhaps most importantly, the performers in the video aren’t obviously trying way, way too hard.

Speaking of the performers, you might recognize a few of them — most of’em have are famous-on-YouTube types in one way or another. The dude in the Taco Truck at 1:30, for example, is the same dude (Ashkon) from that “Don’t Stop Believin” tune that got all huge when the Giants were in the playoffs. Not coincidentally, the creative team that produced that video also made this one.

As I mentioned early, the video actually has a little sneak appearance from an unannounced product packed in. Jawbone played it pretty coy when they mentioned it, saying just that “the clip also includes a new product from Jawbone that will launch this week” without any further detail.

Of course, we pored over it frame-by-frame, looking for any toys hiding in the background that might be Bluetooth-powered. Then we realized that two things were staring us right in the face. 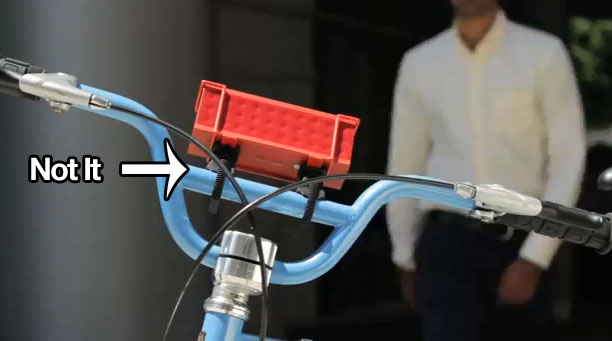 Figuring this was it, I started bugging Jawbone for details. No luck — that wasn’t the product, they said. That’s too bad, really; if it was, it’d probably be the most ridiculous thing I’ve seen any high-end-gadgetry company launch ever. That’s what I thought, at least, until I realized what the actual new product is: 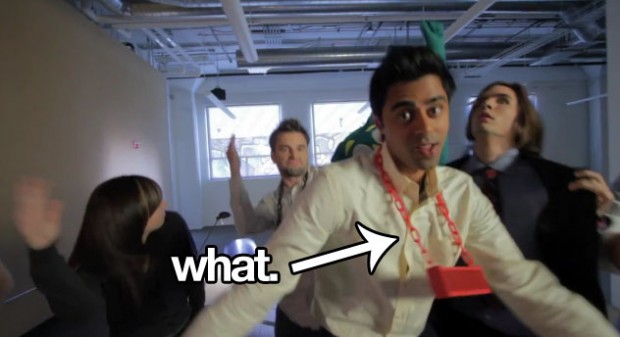 A company that made their name slingin’ pricey Bluetooth headsets to business folks is now going to start making plastic chains that turn their Bluetooth-speaker-thing into a ghetto blaster from space. Awesome.

Dubious? So was I. Very much so. I reached out to Jawbone again, and they confirmed the name and that yes, that’s the thing they’ll be launching later this week — and no, they weren’t screwing with me. I made them promise that last one.

See you guys later — I’m going to go see how many friends I can make by blasting “My Pants” from a Bluetooth speaker chillin’ around my neck.