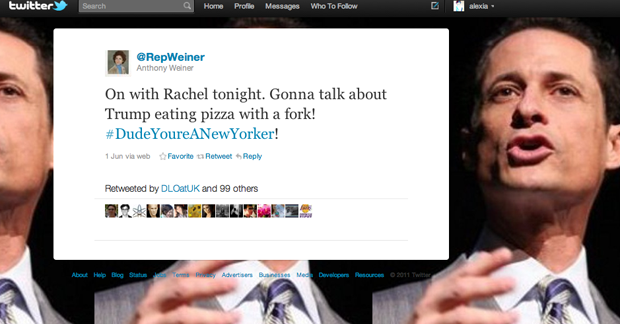 If you talked to anyone over the age of 50 after Twitter announced its photo-sharing service last week, there was most likely one Twitter photo-sharing story on their lips and it wasn’t the launch of pics.twitter.com.

Since his mass-publicized confession that he actually did send an explicit Direct Message to a college coed today, we are perhaps the last online news organization to cover the tale of one fateful failed DM and New York Congressional Representative Anthony Weiner.

I mean, even Twitter employees were high fiving themselves about it earlier.

Techies are fascinated by the #Weiner story because it is the latest train wreck (and cautionary tale) of online communication. Sure most of you aren’t going around sending pictures of your crotches to people, but you’ve probably sent at least one DM or Facebook message or email or text or whatever today that you’d prefer the world didn’t see, because private communication is by definition meant to be private.

Unfortunately this is increasingly not the case.

With their unintuitive “d” syntax, Twitter Direct Messages are slippery — Especially for the less tech savvy. And there are countless tales of DM fails before this one. Perhaps you’ve even failed at DMing someone yourself and quickly deleted it, hoping no one would notice.

And maybe they didn’t notice that time, but, as those who leave their party events set “public” on Facebook will discover, what happens online can be magnified a millionfold.

Weiner functions as some sort of a modern day Bill Clinton. “”I know for a fact that my account was hacked” is the new “I did not have sexual relations with that woman.” Except nowadays you don’t need a Linda Tripp covertly recording your intern to get caught, all you need is a slip of the keyboard and an innocent “d” turns into the scandalous “@” taking down your reputation down with it. Or someone forwards one of your IM chats, and so on and so forth.

There’s a certain naivety bubble in taking photos you don’t want the world to see and posting them to Yfrog, or putting something on YouTube or setting an update to public and then being surprised when your life turns into a meme or a media frenzy.

Gennette Cordoba, the woman who Weiner accidently sent the DM to, describes her experience as such:

“This is the reality of sharing information online in the 21st century. Things that I never imagined people would care about are now being plastered all over blog sites, including pictures of me from when I was 17 and tweets that have been taken completely out of context.”

What does technology change exactly? Well first of all technology makes it easier to connect people, dredging up the six (!) women Weiner had inappropriate relationships with via Facebook or Twitter.  But it also changes the margin for error among communication distribution. What happened to Gennette could easily happen to you if your name started with a G and you made the mistake of following @RepWeiner on Twitter (the DM was actually meant for someone named Ginger).

The more we communicate online, the greater the chances are someone will see something not so flattering about us, because we all make mistakes. And if someone compiled all your private communications with others in an effort to embarrass you it would surely embarrass you, even if you weren’t going around sharing crotch shots.

Giving that this is the case, perhaps Eric Schmidt’s unsettling maxim, “If you have something that you don’t want anyone to know, maybe you shouldn’t be doing it in the first place” is proving to be the golden rule of online discourse in the 21st century?