Editor’s note:This guest post was written by Rocky Agrawal is an entrepreneur who has worked on local products since 1995.He blogs at reDesign and Tweets @rakeshlobster.

In the wake of Groupon’s IPO filing, it’s worth looking at the fundamentals of the offer. Growth numbers to date have been phenomenal. But is it a business that can last?

We love daily deals for a simple reason: the deals have been outstanding. If revenue growth in the first Internet bubble was about selling a dollar for 50 cents, growth in the daily deals business has been about getting other people to sell their dollars for 50 cents and charging them 25 cents for the privilege.

Living through the worst recession in our lifetimes has made such deals even more appealing.

The deals have been embarrassingly good. I used the first Google Offers deal at Floyd’s Coffee yesterday. For $3, I got $10 worth of food. Let me tell you, it’s really hard to spend $10 in a coffee shop. I got an order of red beans and rice, a Mexican Coke, a doughnut and a chocolate chip cookie. The total came to $9.95.

That’s a great deal for me, but it’s unsustainable for the business. (I expect that in this case, the economics were different than the typical daily deal economics, but we’ll get to that later.)

For most local restaurants, the cost of food alone is 25-30% of the price. A sustainable discount is 15-30%. Certainly not 75%. The growth of daily deals has been built around a value proposition to the consumer that is economically unsustainable.

Specific percentages will vary, but these are rough approximations. A business can’t cut prices in half and give half of the rest to someone else and make a profit.

This is a zero-sum game with three parties. Money either goes to the customer (not paid) , the business or the deal provider.

If the business wants to make a little bit of margin on the deal, that money can either come from reducing the deal provider’s share (which will cut into margins) or by reducing the customer discount (which will reduce the appeal of the deal).

Don’t worry about making a profit on this deal, the business is told. It’s all about customer acquisition! You’ll get new customers and you’ll be able to make a lot of money on them in the future. There are a few issues with this:

Offsetting the economics is that merchants keep the revenue from Groupons that aren’t redeemed.

The deal providers need to ensure that the business works for the merchant. In my conversations with merchants, it’s clear that some have jumped on the deals bandwagon because it’s the hot thing to do; not because they’ve meticulously calculated the ROI.

One potential way to make these deals better for businesses is to put usage restrictions on them, so they can only be used during off-peak times. But that reduces the appeal to consumers and makes it less likely that the deal sites will feature you. Other ways would involve better training to help merchants maximize their deal placement.

Assessing merchant satisfaction is difficult at this stage and is largely anecdotal. (Groupon’s S-1 provides little guidance.) A study by Utpal M. Dholakia of the Rice School of Business found that 42% of Groupon merchants would not run another Groupon: “There is widespread recognition among many business owners that social promotion users are not the relational customers that they had hoped for or the ones that are necessary for their business’ long-term success. Instead, there is disillusionment with the extreme price sensitive nature and transactional orientation of these consumers among many study respondents.”

Not all businesses are created equal. There are some that are A-list businesses and most that are not. Examples of national A-list businesses include Amazon, Costco, Starbucks, Target and Apple. If you look up their gift cards on Plastic Jungle, they typically trade for about face value. People consider them as good as cash. You will rarely see huge discounts from them, unless someone else is footing the bill for the discount. Apple is so protective of its brand that it doesn’t even want you to give away its products.

Consumers love these brands, so some deal companies will pay for their discount out of their own pocket. I just got $25 back on a $50 Nordstrom purchase. The $25 was provided by the deal company.

Remember the Gap deal that Groupon ran as its first national deal? That deal added approximately 200,000 customers to Groupon’s rolls. Based on my estimated customer acquisition cost of $26.50, that deal provided Groupon with $5.3 million in subscriber value. Even if Groupon charged Gap nothing to run the promotion, being linked with Gap and getting those subscribers was worthwhile. (Plus all of the publicity the campaign generated.) LivingSocial ran a promotion where it subsidized the cost of Amazon gift certificates and sold about a million of them. A great way to build the list and generate buzz.

The same thing applies in the local market. There are some businesses that can be used to build lists; others to earn money. In Portland, Google has been doing an extensive marketing campaign since last winter. They’ve bought billboards for local businesses, wrapped public transit vehicles, sponsored events at Trailblazers games, hosted private concerts and much more. (See this post for an extensive write up.) 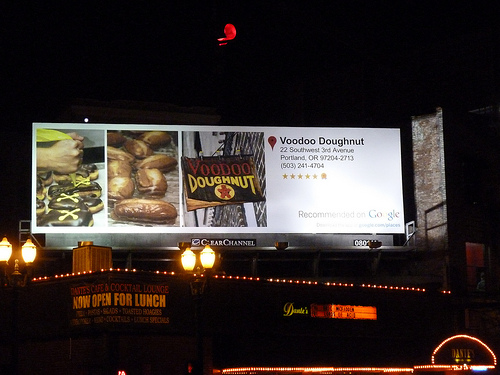 Most of these events have revolved around iconic Portland businesses, such as Voodoo Doughnut. Google recently announced Offers in Portland. But businesses like Voodoo Doughnut have no need for Offers. There’s already a 40-minute wait to get doughnuts. (They’re worth the wait!) If I were managing Voodoo Doughnut, even if Google didn’t want a cut and paid for the discount to the customer, I wouldn’t run an offer. (It cheapens my brand.) There are other things I’d consider, but not discounting my highly sought after product.

But going after these high-profile businesses will be important to building the list. As more Offers roll out, it will be interesting to see what businesses Google targets. If we see a lot of big names, it’s a good sign that Google is either waiving its fee or even paying for the discount. Given the 70% discount at Floyd’s Coffee, I expect that that deal was either no margin or negative margin.

A trend I’ve seen over the last 6 months is an increasing number of national deals from the deal providers. These include things like florists, photo books, photo scanning, custom T-shirts, travel, etc. At a generic level, they use the same 50 / 25 / 25, pricing. But the reality is that the 50% discount to the customer is usually only a 20-30% discount. The balance comes from fake pricing.

Many national businesses use fake pricing as part of their everyday business. If you pay full price at Macy’s, you’ve paid way too much. (Costco and Nordstrom are rare exceptions.) One of the most egregious in the use of fake pricing is FTD. They regularly run promotions with steep discounts off their regular rates. I’ve seen promotions from FTD where you could get frequent flier miles and flowers for less than the price of buying the miles alone from the airline.

FTD also got caught using fake pricing on Groupon. In order to redeem your Groupon, you had to go to a special Groupon-branded FTD site. That site had higher pricing than if you went direct to FTD.com. (Which in turn is higher than any of the numerous FTD promotions around.) When it got caught, FTD did the right thing and honored the Groupon against the pricing on the main FTD site.

Travel is another category that makes extensive use of fake pricing. My favorite example of this is Starwood’s 50% off certificate. You can redeem 1,000 loyalty points for a certificate that will get you 50% off your hotel stay. But that’s based on the hotel’s full rack rate, which almost no one ever pays. As a test, I called to check on the rate for the Palace Hotel for tomorrow. The SPG50 rate is $299. The best phone rate is $199. My corporate rate is $169. The best online rate is $161. Some deal! (I love Starwood Hotels, but this rate is just an embarrassment to the brand.)

The increasing use of national deals, while providing a jolt of revenue and potentially lower cost of sales, has several issues: