In an extremely absurd move by French TV regulatory agency CSA, the French can no longer say the words “Facebook” or “Twitter” on television unless they are in the context of a news story. While France has an interesting history of regulating the adoption of commonplace English words through its Toubon Laws the move isn’t Toubon-related.

Rather it’s about the fact that the usage of these words on television constitutes an ad for these specific social networking services according to the CSA’s logic, showing preferential treatment to them and not others like the French-based Skyrock.

Instead of referring to specific social networking pages, like saying “Find us at Facebook.com/Audi,” or follow us on “Twitter.com/Pepsi” brands will have to skirt around the issue, saying things like “Find us on social networking sites!,” or directing viewers to their community pages and hoping that viewers will just pick up on where to go.

Now this is just shortsighted. The Internet forces you to pick winners, even if those winners are constantly in flux (years ago news stories about this rule would have had the words “Myspace” and “Friendster” in their headlines).

Right now people Google things and don’t Bing them, despite Bing’s best efforts. Like everybody else, governments need to accept that it’s okay to acknowledge that some online services are just more popular; Remember when people got all huffy about the US government putting its videos on YouTube? They shouldn’t have.

Because there are clear winners online (and off) you sometimes you just have to work with them, instead of creating archaic go-arounds. There’s also the argument that politics and the CSA are the current winners in this case, being able to cite a law that went into effect in 1992 before the public availability of the Internet in France. But not for long.

Judging by the ongoing popularity of these social networks (see the Facebook-focused music video above) the CSA won’t be #winning for very much longer. There’s a Bob Dylan lyric that sums this dynamic up nicely, “The first one now will later be last … Oh the times there are a changing.”

And until those times change, here are some of French blogger Benoit Raphael’s ways to circumvent the regulation (translated from the French):

Funny: “Find the live coverage of the trial on our thread on the platform to spread messages of 140 characters.

Confused: “You can send your testimonials page on our social network where you usually have” friends.” Caution, don’t get it confused with the other social where you don’t have friends but followers. 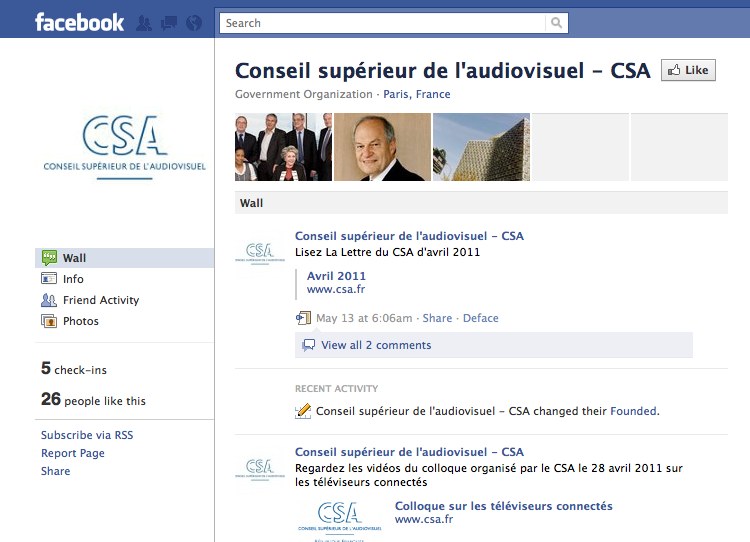