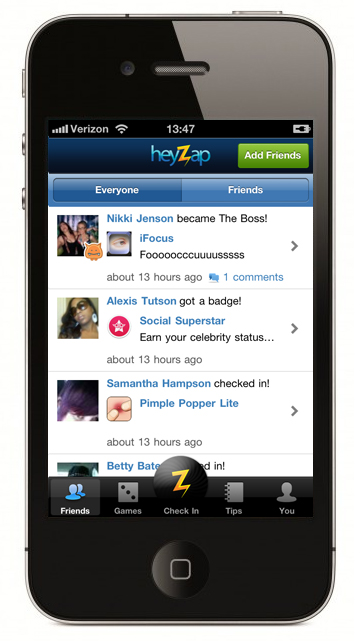 Heyzap, a social discovery platform for mobile and online games, announced today that it’s zapping its way onto the iPhone just in time for WWDC 2011, Apple’s developer conference. The startup will be extending its fast-growing Android community (which launched in March) and has been doubling in size every month since.

In spite of the success of its partnerships with social game makers like Aeria Games, Game Duell, and TheBroth, to name a few, Heyzap Co-founder and President Jude Gomila told me recently that significant deficiencies still exist in today’s online and mobile gaming communities. Chief among them is the lack of an easy and trustworthy method by which to discover new games that target the individual’s specific interests. Gomila saw an absence of viral channels and secure communities for mobile games.

To address this issue, the startup’s new iPhone app will detect recent gameplay and lets people check-in to their favorite games. Once checked-in, users can share scores and more on Facebook and Twitter and see what games their friends are playing.

Mobile gamers can check-in to all 65K games on iOS and all 10K games on Android. And, what’s more, the Heyzap SDK, which launched along with the Android app in March, already has 130 game developers integrated. The Heyzap SDK is designed to provide deeper functionality for developers’ users and to quickly increase the virality of a game by allowing users to check-in (and broadcast) to Facebook, Twitter, and the Heyzap graph by way of a simple button.

The SDK also enables users to more easily find the games played most recently on the Heyzap app and to check-in both at the end of a game’s level and when gamers unlock achievements.

But one of the coolest features of Heyzap’s apps is its ability to detect what games users have been playing, which makes it quick and easy for them to find and share games they’ve played to their gaming graph. It also tracks a user’s checkins to enable them to find niche games and those that aren’t on the app store.

Heyzap also uses an algorithm to track trending games so that you can see what games are trending among your friends, specifically, not just the gaming masses. Since a group of teenage boys is likely to be playing different games than a 45-year-old woman, basing the discovery process on your friends (rather than total aggregated users) is something Heyzap thinks is going to be a better way to find games you’re more likely to play — and enjoy.

A la Foursquare, Heyzap is also adding a badge, or “mayorship” feature, which allows users to become “The Boss” of a game by checking in with gusto. You can compete with your friends to be the boss of a certain game, so even if you can’t beat them at the game, you can still be the boss of checkins.

The Y Combinator alum has raised $3.6 million in capital from Union Square Ventures and other angel investors since its launch in 2008.

Heyzap will also be holding a private WWDC party on Wednesday, June 8th for developers in San Francisco. Open bar, prizes, and food will be in store. If you’re a mobile developer and want to get in on the action, email events@heyzap.com with the promo code “TCROCKS”. The first 30 developers will get a free ticket.

Check out the game on the app store here.