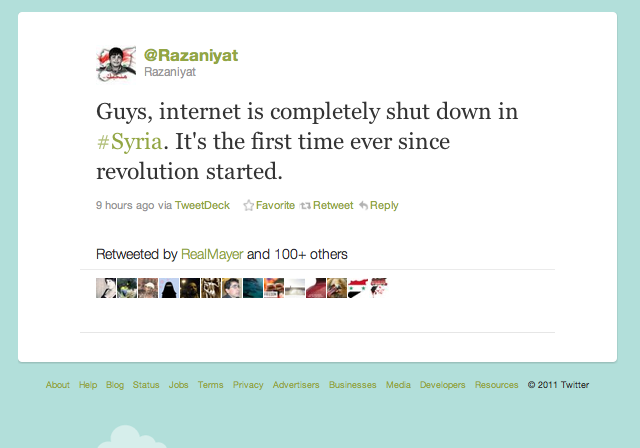 After Egypt and Libya this spring, Syria is the latest Middle Eastern/North African country to get its connectivity pulled due to internal anti-governmental unrest. According to the Rensys blog almost 2/3rds of Syrian networks have been pulled as of late last night. It seems like killing the Internet is the MENA government default when it comes to quelling protests.

According to The Washington Post, around 50,000 protesters took to the streets today demanding that President Bashar al-Assad resign, in protests called “Children’s Friday” and honoring the deaths of 13-year-old Hamza Ali al-Khateeb and another six children killed in the anti-regime uprisings since March 18th.

A similar blackout tactic did not work so well for Egyptian dictator Hosni Mubarek, but Libya’s Moammar Gadhafi is still in power — There’s no real way to determine what effect this move will have on whether or not the protests are successful.

And just like it did for Libya and Egypt, Telecomix is offering a dialup number to Syrians who want to connect, below …