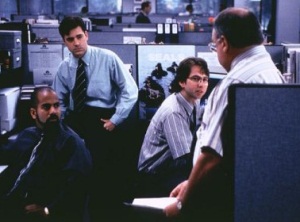 Essentially trying to build a peer-to-peer desk sharing community, Kodesk lets office space owners provide spaces to individuals in need of a temporary place to get some work done.

The Belgian startup was founded just recently, so they’re still figuring out how they’ll turn the basic idea into a viable business.

Currently, Kodesk is completely free for companies and individuals who share desks with others, in order to jumpstart the p2p community aspect. It’s very simple: for every hour of desk space shared by a company, they get one hour of time credit for any of their employees to use in any other Kodesk space.

I like the basic idea behind Kodesk. After all, there’s a lot of unoccupied office space in countless buildings across the globe, and increasingly there are people who can work from basically anywhere as long as there’s a chair, a table and an Internet connection.

The startup’s two founders, Frédéric Navarro and Sébastien Arbogast, aren’t too worried about the security aspect of letting individuals work from a welcoming company’s offices. Though I think the bigger the company, the tighter security will (and should) be, if not for physical theft than for trying to keep people as far away from their computer networks as possible.

But for small businesses, it could work, and Navarro and Arbogast say a thriving ‘co-desking’ community of sorts can also result in collaborations, partnerships, direct recruitments and circulation of ideas and knowledge between workers and companies who invite them to their available office spaces to work for a relatively brief period of time.

It’s why they refer to unoccupied desks in offices as not only a waste of energy and a financial burden, but also a “missed opportunity for serendipity”.

It’s a concept that’s easy to dismiss, but everyone who does should take a good look at how Airbnb was perceived back when they started out a couple of years ago. They’re not valued at $1 billion by investors. 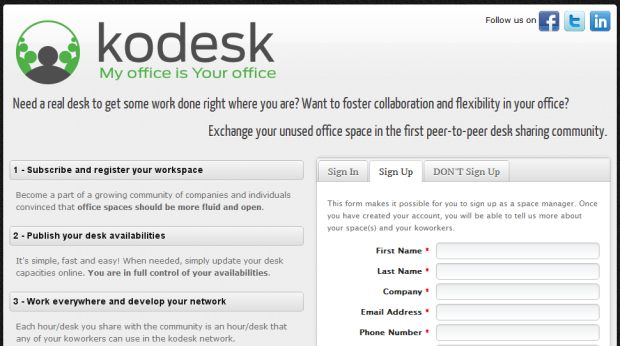