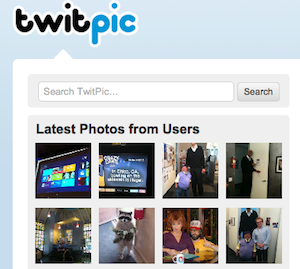 Yesterday, leading up to today’s announcement of Twitter’s new photo sharing capabilities, we reported hearing that Twitter had approached some ecosystem players months ago about their potential move into the arena. One player not consulted? A massive one: Twitpic.

“We never heard from Twitter that they were building a photo feature,” Twitpic founder Noah Everett tells us. That’s interesting since yFrog and Plixi (formerly Tweetphoto) were approached, we’ve heard. Also clearly approached, Photobucket, which ended up scoring a deal to host the images for Twitter.

Twitpic, the longtime leader in the space, understandably, is annoyed by this.

“We understand that Twitter owns and controls the platform, but a clearer roadmap from them and better communication would have been appreciated by us and all the developers,” Everett says. “We’ve always had Twitter’s best interest in mind with building and running Twitpic, we would have hoped the same from Twitter, at least in the form of better communication,” he continues.

This is the same complaint that many ecosystem players have had over the past year with Twitter as they continue to “fill holes” in their product. Many have spoken about being blind-sided as Twitter moved to essentially crush their businesses — businesses built on top of Twitter, mind you.

But it seemed that Twitter had finally learned their lesson here given the talks with yFrog and others well ahead of a launch. Apparently not. Those may have been more about deals for the product (or more), it turns out.

Twitter is clearly free to do as it pleases, and absolutely has a duty to do what they think is in their best interest business-wise and product-wise. But the continual pissing off of the ecosystem partners creates an atmosphere of bad blood. It is business, not personal, but for the players like Twitpic, it must seem like both at times.

“Twitpic will continue to run just as we always have. The brand we’ve built is strong,” Everett concludes. All I know for sure is that they appear to be another tale that will cause third-party developers to sleep with both eyes open.

Update: To be fair, last year at their Chirp conference, Twitter did (sort of) warn that they could get into this the photo space. Below, Jason’s notes that he took at the time:

Q: Is Twitter going to host rich media (images/video/etc)?
Ev Williams: The honest answer is we haven’t made a decision. We love that we don’t have to host media. But we also think there are user experience issues with it. Photos are a fundamental way people share information. They fit in twitter very well. Lots of people have provided that functionality. We think it’s great, we’re looking at how to make it easier.
Ryan Sarver: We’ve been working on a spec that would allow any media provider to send through an API.
Ev Williams: We’re going to make it easier to both share and view pics in our interface. We can’t guarantee that we won’t host media if it’s needed. Not in immediate plans this quarter.