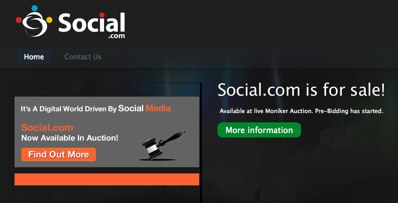 How much is the domain Social.com worth? We are about to find out. The domain will be auctioned off on June 8 at DOMAINfest Barcelona with an opening bid of $5 million, according to Moniker. Moniker and SnapNames will be jointly selling the domain on behalf of Scott Carter, the original owner who first registered the domain back in January, 1995. Back then, he had to pay $100 a year to Network Solutions and all the paperwork had to go through the mail.

Depending on how high the bidding goes, Social.com could very well end up being one of the most expensive domain sales of all time. The current record-holder is Sex.com, which sold for $13 million in April. Bidding for Sex.com started at $1 million. And Social.com is arguably sexier right now.

But Social.com was not always such a hot commodity. Back in 1995, Carter wanted it for a dating site. “It was my intention at the time to build a dating web site to compete with Match.com,” he tells me, “but the effort never got underway. Social.com wasn’t my first choice, but I thought the name was okay.” He ended up using it for a discussion forum called The Social Cafe, which was named a “Cool Site Of The Day on June 22, 1995.

Carter put the domain up for sale in 1997 for $50,000, but had no takers for two years. He tried using the site to promote different businesses, including a social networking directory from 2007 to 2009 and most recently his Twitter tool BigTweet. “I never did quite come up with the right way to develop Social.com,” he says, and so now he is putting it up for auction. Any takers? At $5 million? I think that’s crazy, but what do I know.

How much do you think Social.com is really worth? Leave your guesstimates in comments below.