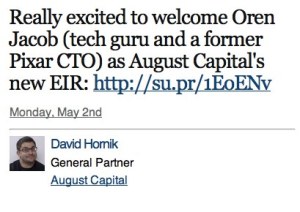 August Capital recently announced that Oren Jacob, CTO of Pixar has joined as their newest entrepreneur in residence. After a few weeks on the job, I got a chance to interview Oren and ask him how his new gig was going. In short, he has new-found respect for venture capitalists and button down shirts.

Oren had no idea how many meetings back to back were in store for him and how hard it can be to put on a fresh face and high level of excitement for each pitch. However challenges like that – and a bad case of entrepreneurial itch – were exactly why he decided to leave Pixar.

After being at the animation company for over 20 years, Oren wasn’t completely ready to take the startup leap, at least not until he’d found a way to understand the challenges of entrepreneurship from every angle. What was it like to sit on the other side of entrepreneurs looking for investment? What’s it like to be a company that successfully received investment and what are the struggles they go through that he will help eventually guide them through? What should you do in a pitch? What should you not do?

The only way to find out was to immerse himself in that world as he prepared himself for his next journey. He’s not entirely sure what he’s going to do post-August Capital, but that’s the nature of being an EIR. He’s hoping a great idea will come to him or that he’ll join an exciting company that crosses his path in one of those meetings.

I first interviewed Oren for my Speaking Of… show where I learned about his love for competitive farming and ‘Ready Set Bag’, the film he made in collaboration with his wife. At the time of that interview, he was still deeply involved with Pixar. In my last interview, I focused on his current side projects, but Oren also told a story that I found truly incredible and that I hoped to write some day, when he was no longer at Pixar. Which is to say, now…

Back in high school in Irvine, Oren had gone to see the Spike and Mike Festival of Animation the year that Luxo Jr. was in it. At that very moment, he decided he was going to apply to both Cal and Stanford because both schools were near Pixar and Industrial Light and Magic (ILM). If he wanted to work at either of those companies, he figured being closer to them would be a good start.

Oren got into Cal and continued to go to the Spike and Mike film festivals and one year saw Tin Toy with a friend. Some weeks later, his friend saw a flyer for an internship on their campus with Tin Toy as the “I” in Pixar. She recognized Tinny from the festival and brought the flyer home, to Oren’s delight. Still, Oren figured there was no chance of him winning the internship: surely they were looking for computer science folks, leaving a mechanical engineering student like him way at the bottom of the list of applicants. So, what does a young enterprising young man do when he wants to eliminate the competition? Well, he strapped on his jogging shoes and ran around campus ripping down every flyer that had been put up. Apparently his tactic may have worked because there ended up being only four candidates for four positions. He got an offer to work there that summer for $10 bucks and hour.

About two weeks into the job in 1990, Oren started to feel guilty that what he had done was dishonest and that building his career on something dodgy was a crappy way to live his life. So, after some thoughtful reflection, he decided to go to his boss, explain everything and offered to resign. For those of you that don’t know Oren, he speaks faster than most humans on earth and you really have to pay attention to follow along. His boss sat there for more than a few minutes in silence as Oren rambled his explanation and apology. Finally he responded, “Wow…”

Oren asked if he should leave or go back to work. His boss just shrugged, so he went back to his desk relieved.

About 6 months later, in the winter of 1991, Pixar had some major layoffs and the company shrank to less than 40 people. Oren was still an intern at the time and had attended both the “you’re being laid off” meeting and the “you are the few who are staying” meeting and decided he liked the latter one better. He went home for the rest of the week, didn’t attend any exit interviews, didn’t turn in any keycards and just showed up for work the next week to a company that was now focused solely on animation.

The guy who dealt with keycards never deactivated his key. Oren kept showing up. Folks were surprised to see him in the hallway, but he played it cool and nobody raised a fuss. Many months later, paychecks started showing up in his box again and continued for 20+ years. Over those 20 years Oren worked obsessively hard and rose through the ranks of the company to CTO.

Stories like Oren’s are rare but always inspiring. I love that he started out as an intern and was so passionate about the company that he would do whatever it took to not only remain there, but see just how far he could go. If he applies that kind of passion and tenacity to his first start-up – whatever that ends up being – only a fool would bet against him.