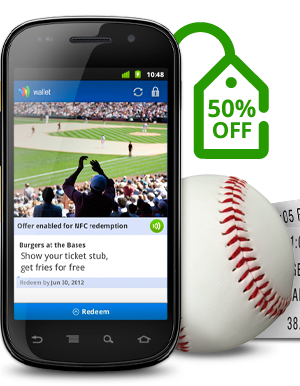 We’re here at Google’s NFC payments announcement, where the search giant has announced a new, important product called Google Wallet (see our comprehensive post on the announcement here). Google Wallet will be launching this summer — it’s currently in field testing — allowing users to tap their phones against NFC-enabled terminals to pay for goods, redeem offers, and use their loyalty cards in a single tap.

Of course, the vast majority of phones out there do not support NFC (the Nexus S is currently the only Android phone on the market that has the technology). Google and its partners reiterated that NFC will be surging in popularity over the next couple of years, and for the time being this is really a first step. But Google also has a plan to enable older devices to use a more limited version of the app: stickers that you can put on the back of your phone.

Google’s Osama Bedier was intentionally vague about the details, but here’s what the plan seems to be: users will be able to obtain special NFC stickers with a single credit card associated with them (such stickers already exist, but these stickers will apparently be able to communicate with the Google Wallet app). It sounds like transactions made using the sticker will be relayed to the Wallet application on your Android device via the cloud. Bedier added that the experience would be limited compared to what you’d get on NFC-enabled phones, but it still sounds pretty nifty.

It’s possible this functionality will be extended to other platforms as well, as Google says it’s willing to partner with everyone to help broaden support for Google Wallet.

And, even if you don’t have the sticker, you’ll still be able to use the Wallet app to keep track of your offers, which you’ll be able to show to cashiers at participating retailers (SCVNGR and Groupon do similar things with their mobile apps).