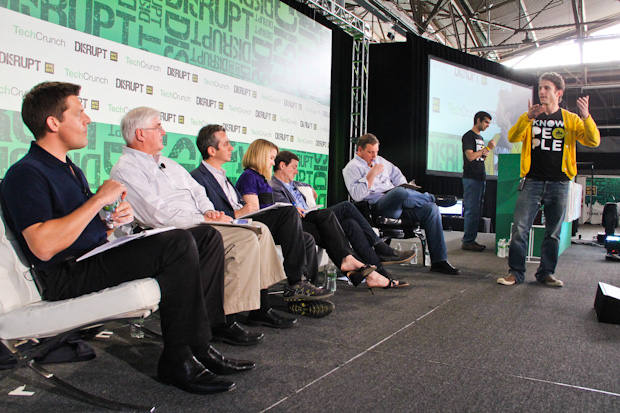 At the TC Disrupt Startup Battlefield finals going on now, after Sonar CEO’s product demo. TechCrunch editor Michael Arrington asked founder Brett Martin, how much he spent to build the service which introduces you to people relevant around you.

When Martin replied that Sonar took around $250K to date to build, Arrington commented, “This is better now than Color could ever hope to be,” looking at Sequoia investor Roelof Botha for comment or reaction. “When you see something like this do you get bummed out that you put 20 [or so] million into color?”

Botha was non-plussed. Sequoia invested about $25 million in photo-sharing app Color’s $41 million Series A round.

“I’m comfortable with silence,” Botha, responded. To Botha’s credit Google’s Marissa Mayer was less effusive, likening the Sonar to a feature rather than the service.

Sonar monetizes by a “Promoted People” feature, which means that users who want to have prime real estate on the app will pay more, and is as of yesterday revenue positive. “That’s so brilliant and so awful,” Arrington said.