Gobble is a way for consumers to find homemade food in their neighborhood. While some sites like Munchery (which we covered here) aim to bring personal chefs to the masses, Gobble is focused more on providing home cooked food in an online marketplace setting. The site is the brainchild of Stanford graduate Ooshma Garg, who ate healthy homemade food at home but found it difficult to find time to cook in college and afterwards, when she worked at a startup.

On the site, users can sign up to order home-cooked food from chefs in their area. You can search by dietary needs and other filters, and the service matches people with chefs’ creations. Members can also review and rate meals. For example, in a search in Palo Alto, I can order Apricot Chicken and Fruit Cake from Chef Fumie ($17), Indian Spiced Sliders by Chef Roshani ($8) or Chicken Himmaphan over Rice by Chef Alisa ($16). You can either pick up these meals, which range from $6 to $20, up or pay $10 for delivery to your home.

Whether you are a professional chef, caterer or love to cook, you can sign up on Gobble to sell your food to your neighbors. Chefs establish the base rate for their meals and the site marks this up by a percentage (but declined to disclose what this percentage is). Garg and her team test out each chef’s food, and vouches for every chef on the site.

The site was previously only available for Palo Alto, but today is expanding its site to the public with chefs featured from San Francisco. The new funding will be used to fuel additional expansion.

I’m a huge fan of this idea. Ordering takeout food can be unhealthy; and Gobble provides an alternative to finding home-cooked food that is also healthy and nutritious. If Gobble can scale, I think it could be a winner. 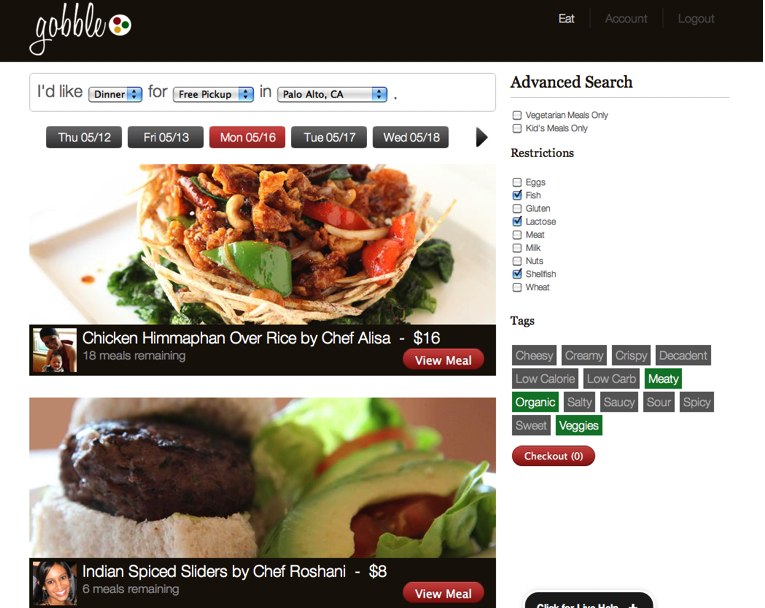