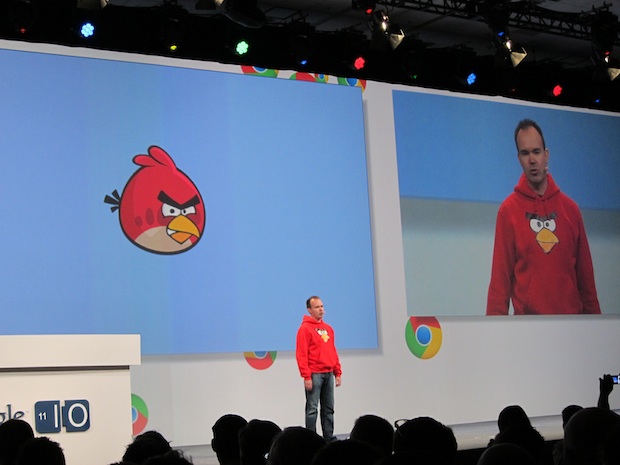 “One of the reasons we’ve been angry is that we haven’t been able to bring Angry Birds to the web,” a Rovio developer noted on stage today at Google I/O. Well guess what? Thanks to the Chrome Web Store, it’s finally here.

And that’s not all. Google’s Sundar Pichai also had some more to share about the Chrome Web Store. In the first three months since launch, they’ve seen 17 million app installs. And developers are telling them that apps installed through the store are seeing users spend roughly two times the amount of time in their apps installed through the store.

And now it’s about to get bigger. Chrome Web Store is finally going international to all of Chrome’s 160 million users over the web, Pichai announced. This means it is now available in 41 languages around the world.

Then Chrome’s Vikas Gupta took the stage to announce another big thing: in-app payments. But the bigger news may be that there will be a 5 percent flat fee to use these within Chrome. He laid out the math for everyone: that means developers keep 95 percent — that’s huge.

Rovio noted that they were very excited about this. Obviously.