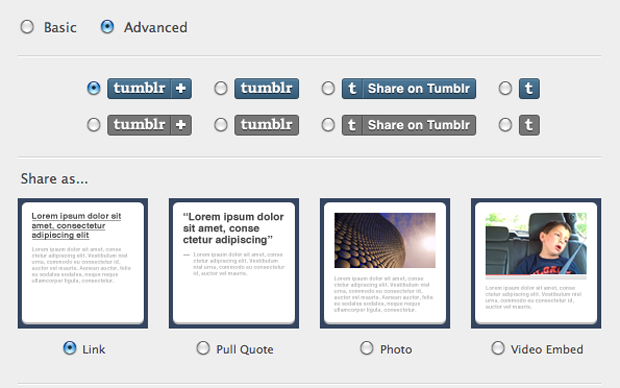 Following in the footsteps of Facebook, Twitter, Digg and even Google, blogging platform Tumblr has released its ‘Share On Tumblr’ button, which allows publishers to add a button encouraging users to share their content on Tumblr (just paste the javascript tag into your source code).

The basic behavior of the button is simple enough, but the advanced features are where the ‘Share on Tumblr’ button sets itself apart from other social engagement buttons out there.

With the ‘Share On Tumblr’ button,  publishers can decide whether their content appears as a Link, Quote, Video Embed or a Photo on Tumblr. The button is fully customizable and is versatile enough to appear anywhere on a site, whether at the footer of articles or while hovering over paragraphs. You can also choose whether the content will appear as an excerpt or summary when reposted on Tumblr.

Tumblr is responsible for 26 million visitors per month globally, according to comScore. Currently there are over 5 billion posts on Tumblr, 18 million total Tumblr blogs and there have been already 30 million Tumblr posts just today. Publisher-friendly options like a multi-faceted share button will indubitably increase that number, and drive considerable traffic to publishers.