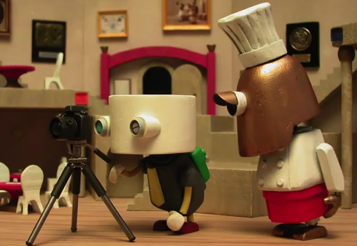 Today at Social Loco, Google’s Marissa Mayer gave a keynote presentation outlining some of Google’s recent advances with its local products. She also unveiled two new features related to Local: a tablet version of Google Earth for Android, and a new extension of Places called Business Photos (which is essentially ‘Street View’ for business interiors).

Back in March at SXSW, Mayer announced that 40% of Maps usage was coming from mobile phones. Today, she announced that the number is now up to over 50% (she qualified this by saying the stat is for weekends, but it sounds like the weekday trend isn’t far behind). Next, Mayer announced that Google has now racked up some 5 million ratings and reviews in its database of Places, thanks in part to its successful (and oddly named) Hotpot project.

The keynote then turned to some product launches. The first is Google Business Photos, which will allow users to explore the interiors of select businesses in the US, Japan, Australia, and New Zealand. The interface looks identical to Google Street View, allowing you to ‘look around’ the interior by dragging your mouse. Oddly, instead of allowing businesses to take these photos themselves, for the time being they have to request a Google photographer — though I won’t be surprised if Google eventually launches a photo app that makes it easy to take these 360 degree photos. You can find an extensive FAQ on the process (which includes the cities that Google will be supporting initially) right here.